Home Guides How to Get a Celestial Shell in Terraria 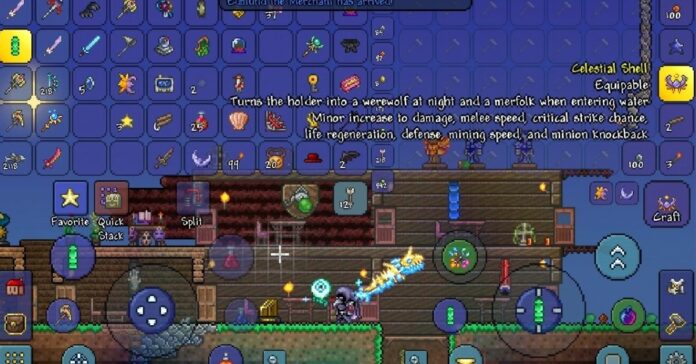 The Celestial Shell in Terraria is one of the best combat accessories. It increases the stats of the character, and at night it turns you into a werewolf giving you bonuses. Since version 1.4 of Terraria, the effects cannot be stacked with other stones. But still, it is an object that many players want to get. Therefore, in this guide, we will tell you how to get the Celestial Shell.

How to Craft the Celestial Shell in Terraria?

In order to get it, you need to kill several bosses in a strictly defined sequence.

In Terraria, bosses provide access to new events, NPCs, functions, and more. Boss number one is the Wall of Flesh. Go to the underworld and kill it there.

Next, you need to kill three mechanical bosses: The Destroyer, Skeleton Prime, and Twins. After this, in the jungle, you should find and kill the Plantera. And after all this, you should kill the Golem.

RELATED: Terraria 1.4: How to get Berserker’s Glove

You will need to receive four ingredients:

After that, you need to have a goblin tinkerer. You should buy a special table for a blacksmith from him.

Now we craft a celestial stone from the moon and the sun. And from what is left we craft a moon shell.

From the obtained two materials, we can already make one of the best accessories in Terraria – the Celestial Shell.