Home Guides The Solar Eclipse Event in Terraria: How it Works, How to Trigger... 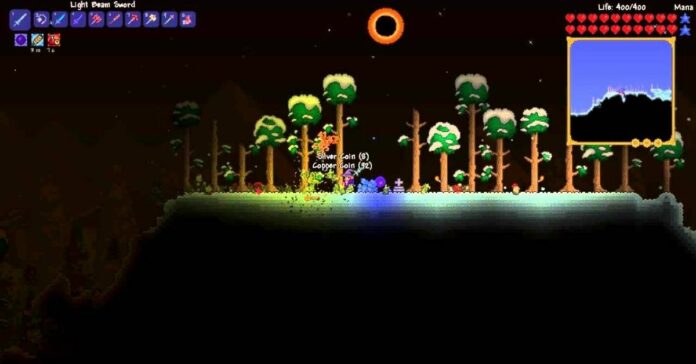 A solar eclipse in Terraria is a rather difficult game event. It can happen under different circumstances.

For example, it can happen after the death of one of the mechanical bosses and the transition to hard difficulty, or may appear with a chance of 1:25 instead of the usual day. You can also trigger a solar eclipse yourself using a solar tablet.

The Solar Tablet can be found in Lihzahrd Chests in the Jungle Temple, but it can be crafted if desired. The recipe is quite simple: for crafting, you need fragments of a solar tablet, which can be obtained by killing lizards and snakes in the jungle temple, and a Mithril or Orichalcum anvil. The resulting tablet can only be used during the day.

Monsters During a Solar Eclipse

In version 1.3, the ability to increase the difficulty of this mode was added. The difficulty depends on which bosses you killed before the start of the mode.

RELATED: Terraria: How to Summon and Defeat the Golem

If the player has just started playing and has not yet killed a single boss, then in this case there will be only such monsters as:

After the player kills one of the mechanical bosses, the following monsters will be added to the list of enemies:

Well, after the death of the boss Plantera, the list of monsters of the solar eclipse will be updated with such enemies as the following:

During a solar eclipse in Terraria, you can get a lot of useful things, including such material as the broken hero sword, which drops out when killing a Mothron.