Home Guides How to Get the Broken Hero Sword in Terraria 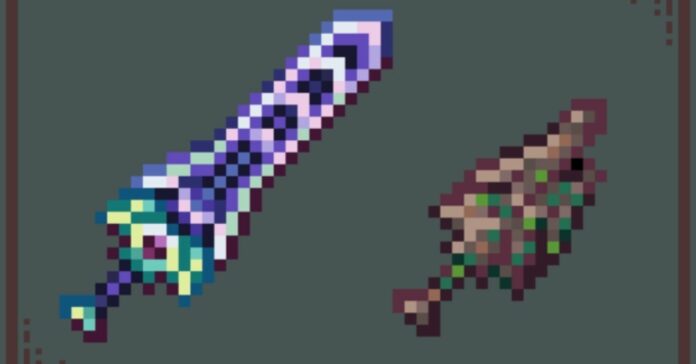 In version Terraria 1.2, a new weapon was added, which was called “Broken Hero Sword.” This sword is used to create the most powerful swords in the game: the Excalibur and the Blade of the Night, from which you can subsequently create a Terra blade. In the mobile and console versions, it is also used to create the Sword of the Earth.

Before Terraria 1.3, the player could get a broken hero sword by killing Frankensteins or swamp creatures, but with the release of new updates, the way of obtaining has changed, and now, obtaining material has become a little more difficult.

In order to get the Broken Hero Sword in Terraria, you need to go into hardmod mode. This can be done by killing the boss called “Wall of Flesh.” After the mode starts, you need to kill three bosses, namely Skeletron Prime, Destroyer, and The Twins.

RELATED: How to Summon and Defeat the Empress of Light in Terraria

Destroyer in Terraria can be summoned with the help of a mechanical worm, which is crafted in 4 ways. The first 2 methods use an iron ingot in the amount of 5 pieces, the soul of night 6 pieces, rotten meat 6 pieces, and a mithril or orichalcum anvil. The next two methods are exactly the same as the first, except that a lead ingot is used instead of an iron ingot.

And finally, to summon Skeletron Prime, you need to get a mechanical skull. For it, you need 30 bones, 5 iron or lead ingots, 3 souls of light, and 3 should of night. And all this is should be combined with the help of a mithril or orichalcum anvil.

All these bosses must be killed, otherwise, the broken sword will not drop.

How to Get a Broken Hero Sword in Terraria

After all the conditions are met, you can proceed directly to getting the weapon. In Terraria 1.4, this unique material can be obtained by killing Mothrons.

These mobs appear only during a solar eclipse in hardmore mode and are the most powerful monsters during an eclipse. The chance of a hero’s broken sword drop is 25% in normal mode and 37% in expert mode, but it can be increased by using a water candle and battle potion, which increase the spawn of monsters.