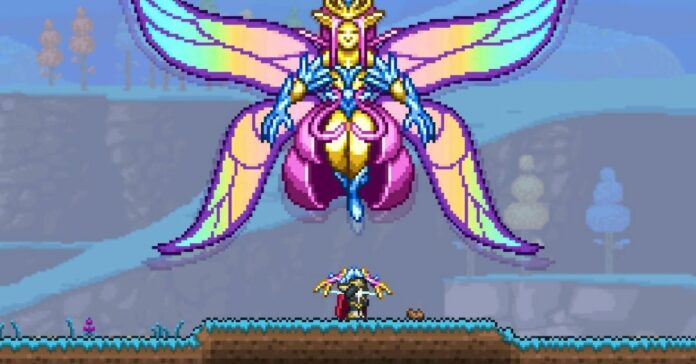 The Empress of Light in Terraria is the enemy of the very late stage of the game, so you will not only need to open a hard mode but also collect the best equipment before thinking about summoning a boss. By the way, it also has a bonus extra-difficult mode associated with the beginning of the battle at a fixed time of day. In this Terraria Empress of Ligh guide, we will tell you everything you need to know about one of the hardest bosses in the game.

How to Summon Empress of Light

You can summon it at night in the biome of the rainbow ponies Hallow. You will need to kill the Wall of Flesh thus activating the hard mod, and also defeat Plantera in order to proceed to the very late game stage.

Walk around the biome, looking closely at your feet. You need to find the neutral Prismatic Lacewing. After killing a harmless butterfly, you will anger the empress and start a fight.

RELATED: How to Make an Ironskin Potion in Terraria

How to Kill Empress of Light Boss Guide

The boss may look pretty and cute, but it bites painfully, so we recommend staying away from it by attacking with ranged weapons. The boss has the following attack:

The fight itself is divided into two stages: up to 50% health and after. In the first stage, attacks are repeated in the following order:

In the second stage, the pattern changes to this:

Related | How to Make a Sawmill in Terraria

You will need to carefully dodge the stream of projectiles, so attacking the boss in a close range will not be the best idea. In addition, if you can manage to memorize the boss’s movements, dealing with the Empress will be much easier.