Home Guides Terraria: How to Summon and Defeat the Wall of Flesh 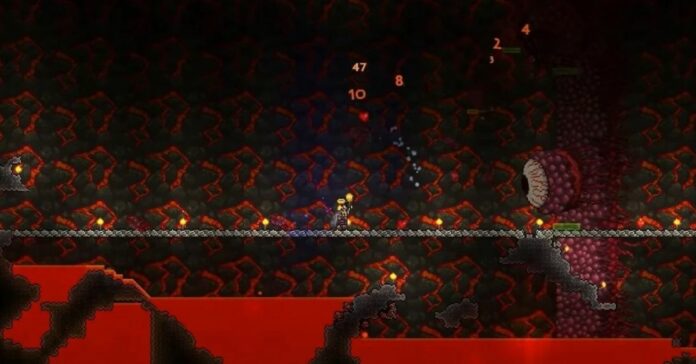 Your entire walkthrough of Terraria can be divided into two parts: before the so-called Hard Mod, and after it. This is a major change, and you need to be ready for it because, with the onset of the hard mod, the world will begin to become infected, monsters will become stronger and a huge number of new things will appear. And the threshold to this world is a unique boss which must be defeated. So, how to kill the Wall of flesh in Terraria? In this guide, we will give you all the answers.

Preparations for the Fight with the Wall of Flesh

First, you need to prepare the site for the upcoming battle. You need to build an arena from the beginning to the end of the map. Yes, it is a lot and difficult. The thing is that you will need to run fast and a lot. You just need to put a line of blocks. Holes must be made in all obsidian towers along the way.

If you play in Expert mode, you will also have to make the rails, since in this mode, the wall moves too fast, and the minecart is the only thing that will help you.

Equipment can be varied, it all depends on your style. But it is much easier to use ranged weapons because getting close to the Wall with a sword will be very inconvenient.

RELATED: The Frost Moon Event in Terraria: How it Works, How to Trigger It

It would be nice for the Expert Mod to own a bee cannon, a backpack, and a hundred bee grenades. Here the fight will be much more difficult but the reward is also better.

How to Spawn the Wall of Flesh in Terraria?

We’ll have to make a sacrifice in the form of Guide. You need to find his voodoo doll in hell, which demons usually drop, and throw it into the lava. Yes, the Guide will die, but he’ll be back the next morning as good as new. It is better to do this at the edge of the map. In a couple of moments, the tentacles of a huge creature will appear.