Home Guides The Frost Moon Event in Terraria: How it Works, How to Trigger... 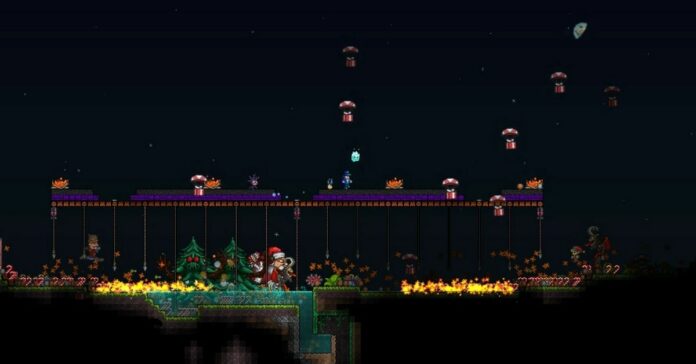 Frost Moon in Terraria is an event added in version 1.2.2 in honor of the New Year. It is similar to the Pumpkin Moon but with stronger enemies. In this guide, you will find all the info you need to have to deal with this event.

How to Start a Frost Moon in Terraria

It is summoned at night by a Naughty Present. During this event, you are attacked by many monsters that come in waves. The event lasts until dawn. The frost moon can be started at any time of the year, not just Christmas. During this event, strong and fast opponents appear, which are not so easy to defeat. During it, the moon turns into a snowman’s head. In addition, there is also unique music playing.

The ingredients for the Naughty Present in Terraria can only be found on Hard difficulty, after killing Plantera. Thus, this event creates problems difficulties even for experienced players.

RELATED: Terraria: How to get a Mechanical Skull

How Does Frost Moon Work?

The entire event consists of 15 waves, plus 5 bonus waves. For every enemy killed, you get kill points. They are needed to move to the next wave. After moving to the next wave, your points are reset, and you need to collect these points again to move on to the next wave.

If during the event you die, then it will not end. The event ends with the onset of dawn only. Also if you leave the world, and then enter it, then the event will end.