Home Guides Terraria: How to Summon and Defeat the Destroyer 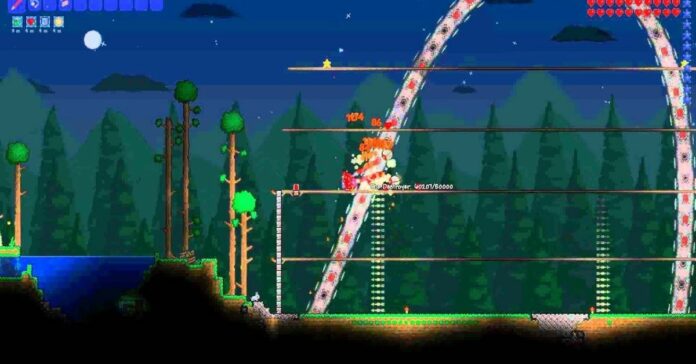 Today we will analyze a mechanical boss from the hard mode in Terraria – the Destroyer. This fat worm is a very hard enemy especially for new players, so we made a detailed analysis of the fight with this enemy.

From the article, you will learn the main indicators and attacks of the boss, which arena and equipment should be used, methods of spawning him, and tactics of battle. Study the enemy thoroughly and you will not have any problems in destroying it.

The Destroyer is a hard-mode version of the Eater of Worlds. Unfortunately, aside from a couple of general attacks and appearance, the Destroyer has nothing to do with its predecessor.

RELATED: Terraria: How to Find a Plantera Bulb

First, the boss has total health of 80,000. This is the thickest enemy in the entire game. But, despite this, it will not be very difficult to deal with it.

Secondly, the enemy is not divided into several parts, as the Eater of Worlds did. Instead, each destroyed segment becomes a separate piece and attacks the player with lasers. In total, there are 86 segments in the body of the Destroyer. If you build the arena correctly, you don’t have to worry about these small minions at all.

Thirdly, the worm uses lasers that do 55 damage.

Despite the overall health for the whole body, each part of it has different protection:

Consider this feature and strike in more vulnerable places.

Now let’s discuss how to prepare for the fight.

To defeat the worm, you will have to prepare well, and we will start with the arena. You have to build a box 10 by 20 blocks. It is necessary to locate this structure at the level of 15 blocks from the ground. This design will protect the character from the separated parts of the boss and help kill him faster.

The second stage of protection will be armor. To effectively deal with the enemy, we use the Holy armor with a helmet for magicians. By the time of the battle, the player should have 400 health points and 200 units of mana.

And now the weapon. You must use the Magical Harp. In an enclosed room, notes will bounce off the walls and inflict huge damage on the enemy. Accessories will be able to improve the equipment: the emblem of the mage, the emblem of the avenger, the obsidian shield, and the philosopher’s stone.

RELATED: The Frost Moon Event in Terraria: How it Works, How to Trigger It

How to Spawn a Destroyer in Terraria

The Destroyer in Terraria appears in two cases:

The boss is only summoned at night. If you decide to start the battle closer to morning, you will need to defeat the Destroyer as soon as possible, otherwise, it will simply disappear.

There are times when you used a warm, and then an inscription appeared on the screen. In such a case, you will have to kill 2 bosses at once.

The fight itself does not require any special skill. Wait for the enemy to fly through the walls of the cage and attack him with a harp. Bouncing projectiles will quickly deal with the enemy.

If all the preparations for the battle have been done correctly, you will very quickly kill the worm and receive the desired reward.