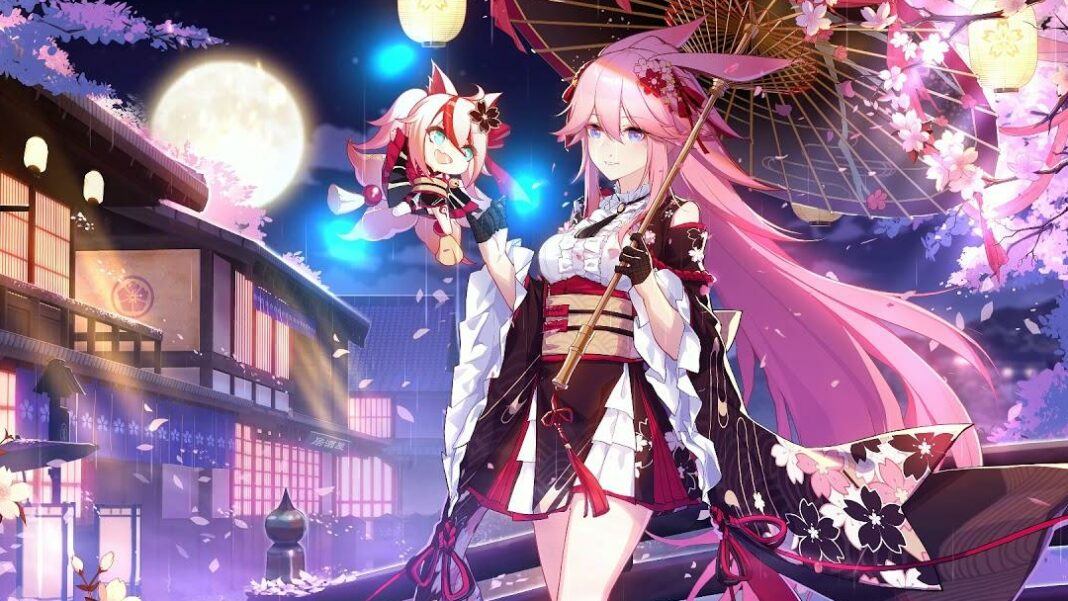 Genshin Impact 1.5 Livestream showcased every new content added, including the most hyped Zhongli re-run banner, the two new playable characters Eula and Yanfei and the housing system. At the end of the Livestream, we got the very first look at some of the locations from the upcoming region Inazuma. The most fascinating thing was, the reveal was done by a new Chibi character who looks similar to Yae Sakura from miHoYo’s previous gacha game, Honkai Impact The Third.

At first, the fans were excited to see her. As for the past few months, thanks to some leaked character voice lines, many had predicted that we may see Yae Sakura make an appearance in Genshin Impact.

Yae Shintze is from the Yae family of Inazuma who also serves as the Chief Priestess of the Grand Narukami Shrine. She shares the same family name as Yae Sakura from Honkai Impact. Not only that, during the Livestream, Zhongli often referred to Yae Shintze as “fox”, moreover, Yae Sakura was a Miko(Shrine Maiden). So, with all that here are some of the common similarities between Yae Sakura and Yae Shintze.

As per the available information from Genshin Impact character voice lines and version 1.5 Livestream. Yae Shintze is an “old friend” of Morax(currently known as Zhongli) and Baal, and is acquainted with Ganyu.

Yae Shintze and the five-star Cryo Sword user Kamisato Ayaka are also well acquainted with each other. Last year, in the Genshin Impact New Years tweet, Yae welcomed Ayaka to her shrine as the first guest of the year.

Who is Yae Guuji

Just to avoid any confusion, Yae Guuji is Yae Shintze. During the version 1.5 Livestream, she was referred as Yae Guuji. And for those of you don’t know Guuji is a Japanese term that means chief priest.

We do not have any official confirmation on whether Yae Shintze is Yae Sakura. There are so many similarities between the two characters that one can say that both are same. However, at the same time, the lore and many other aspects make it highly unlikely that Yae Sakura is Yae Shintze.

For now, we will move on with the narrative that Yae Shintze is not Yae Sakura. If there is any official news on this front. We will update this section.