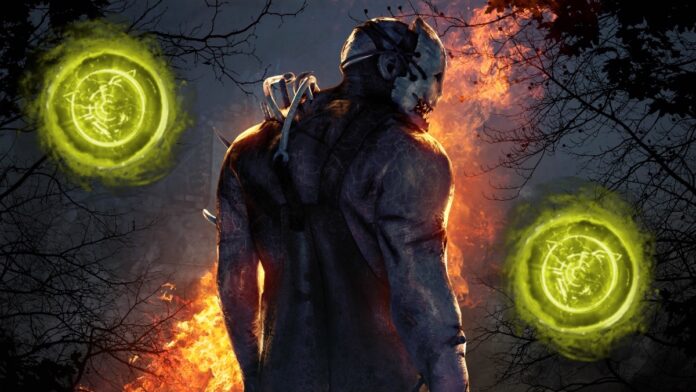 Some of Dead By Daylight’s challenges include glyphs that appear in the tome for both Survivors and Killers. The glyph challenges come in different colours and a variety of difficulty, from easy red glyphs to tricky yellow or white ones. Every one of the glyphs require the Survivor or Killer to interact with it during a game. Some glyphs are Survivor-only (blue, yellow, white), and one is for the Killer only (purple), while green and red glyphs can be completed by either player type. Blue glyphs ask the player to interact with the glyph during the game and then escape, as opposed to red glyphs which just need be communed with by either Killers or Survivors. White glyphs are one of the most difficult to complete as they must be picked up and taken to the Basement. Yellow glyph challenges also take some real skill! Find out more below.

What is the Yellow Glyph?

The yellow glyph can be found as a tome challenge. It is a Survivor-only challenge and cannot be completed by the Killer. The player must select and accept the challenge for the glyph to appear in the next match. When the challenge is complete, the player is rewarded with Rift Fragments and Bloodpoints.

The player will then press the interaction button to begin ‘communing’ with the glyph, activating a tricky skill check challenge. The glyph will create 6 consecutive skill checks that the Survivor must complete. If even one is missed, the glyph will disappear and respawn again somewhere else in the map.

Once the player completes all 6 tricky skill checks, that is the glyph completed! Good luck!

How to Get the Yellow Glyph in Dead by Daylight