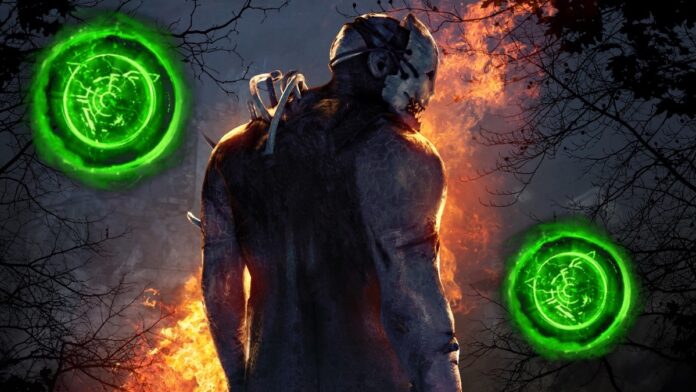 Dead By Daylight’s glyphs appear as a part of tome challenges available for both Survivors and Killers. There are six glyph challenges that can show up in a tome, and they come in different colors. Each glyph requires either Killer or Survivor to interact with them during the match. Some glyphs are Survivor-only (blue, yellow, white), and one is for the Killer only (purple). With blue glyphs they must interact with the glyph during the game and then escape, yellow glyphs involve completing multiple skill checks, and white glyphs must be picked up and taken to the Basement. Red and green glyphs can be completed by either Killer or Survivor and are the easiest to complete. Find out more below!

What is the Green Glyph?

The green glyph in Dead By Daylight can be made to appear in the game by selecting the correct challenge in the tome. Multiple glyphs can be found but they can be done in separate matches if needed. Each match contains at least two glyphs, and a maximum of 6, to try to discover and interact with. Once the challenge is complete, the player is rewarded with Rift Fragments and Bloodpoints.

Communing With the Green Glyph

This challenge can be completed by either Killer or Survivor. Green glyphs appear in areas where players would normally find totems ad a distinct sound can be heard when the player approaches the right spot. A small green diamond appears when the player is close enough to them.

Players can then ‘commune’ with the glyph by using the interaction button. This interaction takes longer than a red glyph does (around 10s).

At end game collapse when the doors have been opened the auras of any left over glyphs appear briefly. Players can decide either to try and find the glyph or leave the match and try again next game.

How to Get the Green Glyph in Dead By Daylight