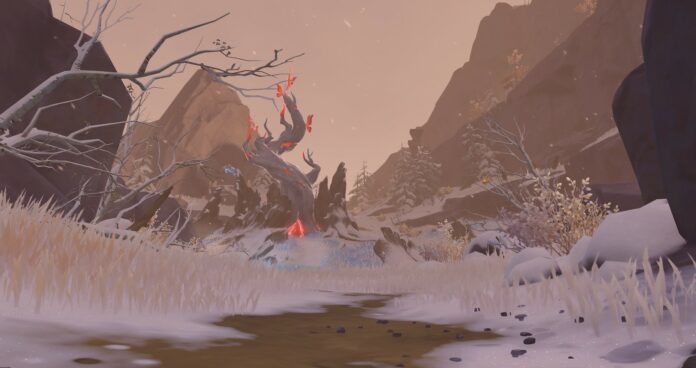 Genshin Impact’s new upcoming location Dragonspine holds a range of secrets, dungeons, history, and other things that players can unveil once the update 1.2 is online. Dragonspine is a cold harsh icy tundra with many iconic places – The Frostbearing Tree being one of the many.

Alike the Statue of Seven, the Frostbearing Tree is a place where players can offer a new item called Crimson Agate to receive a wide range of rewards – including Acquaint Fate, Intertwined Fate, Mora, Northlander Polearm Prototype, and more.

Before moving on to the location of Frostbearing Tree in Genshin Impact – let us talk about Crimson Agate. With Genshin Impact 1.2 update a new oculi-like(not actual oculi) item that looks like a floating crimson crystal will be added to the game and it is officially called Crimson Agate.

The Frostbearing Tree in Genshin Impact is located in-between the Entombed City – Ancient Palace and the Snow Covered Path of the Dragonspine region. It is denoted by a helical black flame like icon – that in actual is representation of a withered tree.

In the above map of Genshin Impact’s Dragonspine location – you can see the frostbearing tree is located near the Statue of Seven. The best part about the location of the tree is that it can be accessed via teleportation – through the statue of seven or the teleport point near the tree(once unlocked).