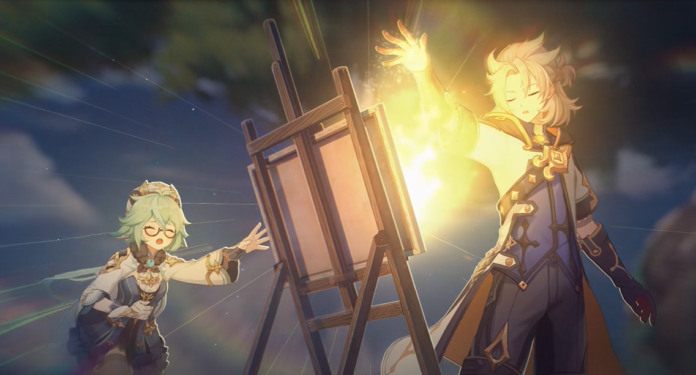 Earlier Today, miHoYo revealed a new character teaser trailer for one of the upcoming Genshin Impact’s five-star playable characters – Albedo. For players who don’t know, Albedo is a GEO user whose weapon of choice is a sword. Alongside Albedo, Genshin Impact 1.2 update is also going to introduce one of the most hyped character’s Ganyu.

The new character teaser is called “Albedo: Still Life and Creation“. For the first time, we have a teaser that showcases an interaction between Albedo and Sucrose(Albedo’s assistant, as well as, a playable character in Genshin Impact). With the short trailer, we have three things that stand out the most.

We already knew that Sucrose is assistant to the genius Alchemist Albedo. Though seeing the new teaser and character details(revealed on the Genshin Impact’s official website) we now know that Albedo is a person lost in his own world. While Sucrose is more sensible and aware of the aftereffects and consequences of alchemy. Some of the dialogues from the official character details post explain Albedo’s character even more.

The teaser was small and we only got a few dialogues exchanges in-between Sucrose and Albedo.

Apart, from the new character teaser. The official website for Genshin Impact revealed major details on Albedo like his skills, abilities, story, and much more. We also got the new cover art for Albedo – that comes with a short profile of his, like constellations, the weapon of choice, vision, affiliation, etc.

The official cover art for Albedo highlights the following –

As mentioned earlier, Albedo is a Geo element user and a new addition to the list of existing Geo users in Genshin Impact. His elemental skill is called Abiogenesis: Solar Isotoma and the elemental burst attack is called Rite of Progeniture: Tectonic Tide.