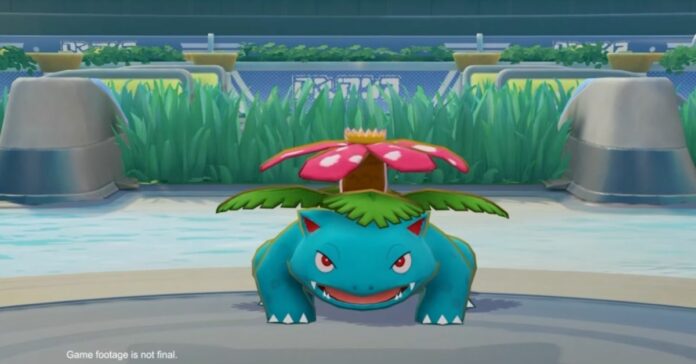 Venusaur in Pokémon Unite is an Attacker type of Pokémon with an Intermediate Difficulty to play. It starts the match as Bulbasaur then evolves into Ivysaur at level 5. Finally, it becomes Venusaur at level 9. In this guide, you will find everything you need to know about Venusaur, including his best moves and items.

How to Get Venusaur in Pokémon Unite

To obtain Venusaur in Pokémon Unite you will need to buy a Unite License. It costs 8,000 Aeos Coins or 460 Aeos Gems. Once you bought it you will be able to use this character. Also, you will get Venusaur when you reach Trainer Level 5.

At level 5 you will be able to replace Seed Bomb with one of two Moves. Both of them will be upgraded at level 11. These abilities are:

At level 7 you may choose the one of two following Moves. It will be the replacement of Razor Leaf. These abilities will be upgraded at level 13.

At level 9 Venusaur gets its Unite Move. Verdant Anger allows Venusaur to throw a large seed that splits into four parts after it hits the ground. It deals a huge amount of damage and decreases opponents’ Movement Speed for short time.

Venusaur in Pokémon Unite is an Attacker type of Pokémon. It deals a lot of damage with its Moves. As Held Items we recommend:

As Battle Item we recommend you Eject Button as an additional opportunity to escape from troubles.

How to Play Venusaur in Pokémon Unite

Venusaur in Pokémon Unite is a strong Attacker. It deals a huge amount of damage but has a lack of crowd control and mobility. Giving these facts, it is not the best option for a damage dealer. But if you decided to go with this character, then pick Seed Bomb at level 1, as it has a lesser cooldown. If you want to concentrate on damage choose Sludge Bomb and Solar Beam. If you feel a lack of survivability then Giga Drain will be a good option. Throw everything you have in opponents and annihilate them as fast as you can. Good luck in your further matches.