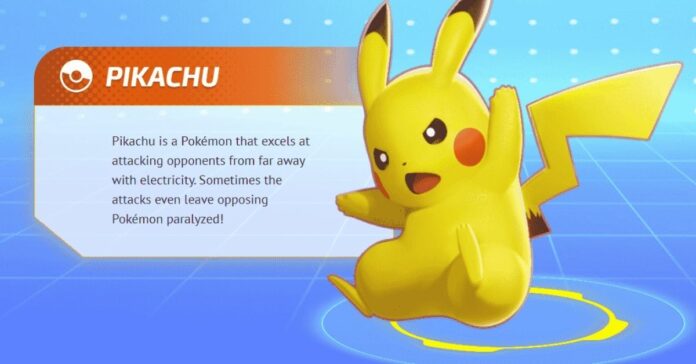 Pikachu in Pokémon Unite is an Attacker type of Pokémon with a Novice Difficulty to play. It doesn’t evolve. In this guide, we will tell you everything you need to know about Pikachu: moves, best items, build, etc.

How to Get Pikachu in Pokémon Unite

To obtain Pikachu in Pokémon Unite you will need to buy a Unite License. It costs 6,000 Aeos Coins or 345 Aeos Gems. Once you bought it you will be able to use this character. Also, Pikachu is available as one of the five Pokémon you can choose after completing the first tutorial.

At level 4 you will be able to replace Thunder Shock with one of two Moves. Both of them will be upgraded at level 11. These abilities are:

At level 6 you may choose the one of two following Moves. It will be the replacement of Electroweb. These abilities will be upgraded at level 13.

At level 9 Pikachu gets its Unite Move. Thunderstorm creates a lightning storm that follows Pikachu and deals a huge amount of damage in a large area around the Pokémon.

Pikachu in Pokémon Unite is an Attacker type of Pokémon. It is a strong damage dealer that mostly relies on its Moves with good crowd control potential. As Held Items we recommend:

As Battle Item we recommend you to try X-Attack. It makes your Pokémon deadlier for a short time. Also, don’t forget about Eject Button. It is always a good option.

How to Play Pikachu in Pokémon Unite

Pikachu in Pokémon Unite is one of the best Attacker Pokémon in the game. It deals a huge amount of damage and has good crowd control options. At level 1 we recommend you to pick Thunder Shock as it has a lesser cooldown. Also, there is a good combination of Thunder and Thunderbolt that allows you to stun your opponents and deal a lot of damage in a small area. But you always can pick Electro Ball as a versatile Move. Try to learn this Pokémon and you will shock your opponents with its damage and stuns. Good luck in your further matches.