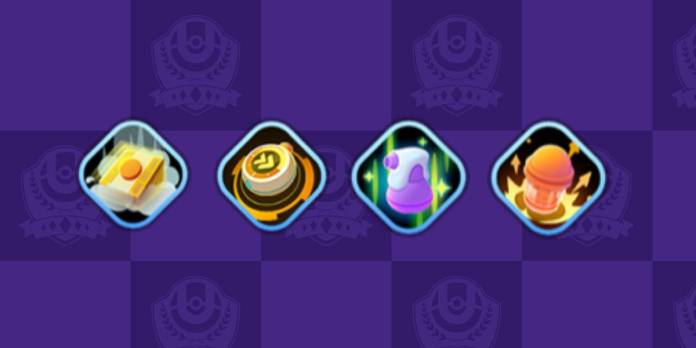 There are two types of items in Pokémon Unite: held and battle items. Held items grant passive effects to your Pokémon, while Battle items can be activated for a temporary buff or heal. Both types of items can help your Pokémon with specific tasks, so knowing what items do what is the key to victory! Here are all the items in Pokémon Unite and their effects!

Leftovers: When the Pokémon is not in combat, it recovers 1% of its max HP every second.

Muscle Band: When basic attacks hit, the damage is increased by 1% of the opposing Pokémon’s remaining HP.

Shell Bell: When the Pokémon hits with a move, it recovers a minimum of 45 HP. The higher the Pokémon’s Sp. Atk, the more HP it recovers.

Focus Band: When the Pokémon drops to low HP, then each second for three seconds, it recovers 2% of the HP it had lost.

Float Stone: Increases movement speed by 10% when the Pokémon is not in combat.

Buddy Barrier: When the Pokémon uses its Unite Move, that Pokémon and the nearby ally Pokémon with the lowest HP are each granted a shield equal to 20% of their max HP.

Score Shield: While the Pokémon is attempting to score a goal, it is granted a shield equal to 5% of its max HP and its goals cannot be interrupted while it is shielded.

Aeos Cookie: When the Pokémon scores a goal, its max HP increases by 100.

Attack Weight: When the Pokémon scores a goal, its Attack increases by 6.

Sp. Atk. Specs: When the Pokémon scores a goal, its Sp. Atk increases by 8.

Exp. Share: While the Pokémon has the fewest Exp. Points on its team, it gains 2 Exp. Points per second. However, it will no longer received shared Exp. Points when its teammates defeat a wild Pokémon.

Assault Vest: When the Pokémon is not in combat, they are granted a shield that nullifies Sp. Atk damage equal to 9% of their max HP.

Rocky Helmet: When the Pokémon receives a certain amount of damage, damage is dealt to nearby opposing Pokémon equal to 3% of those Pokémon’s max HP.

Energy Amplifier: After the Pokémon uses its Unite Move, the damage the Pokémon deals is increased by 7% for a short time.

Related | Pokemon Unite Aeos Coins – How To Obtain and Use Them

Eject Button: Quickly moves your Pokémon in the designated direction.

Potion: Restores some of your Pokémon’s HP.

X Attack: Raises your Pokémon’s Attack and Sp. Atk for a short time.

Full Heal: Removes all status conditions from your Pokémon and makes it immune to hindrances for a short time.

Fluffy Tail: Leaves wild Pokémon unable to act for a short time and also increases damage deal to those Pokémon.

Slow Smoke: Creates a cloud of smoke that greatly decreases the movement speed of opposing Pokémon for a short time.

Those are all the items in Pokémon Unite! If you have any other questions, let us know in the comments below!

Pokemon Unite Items – Every Item in the Game and Their Effects