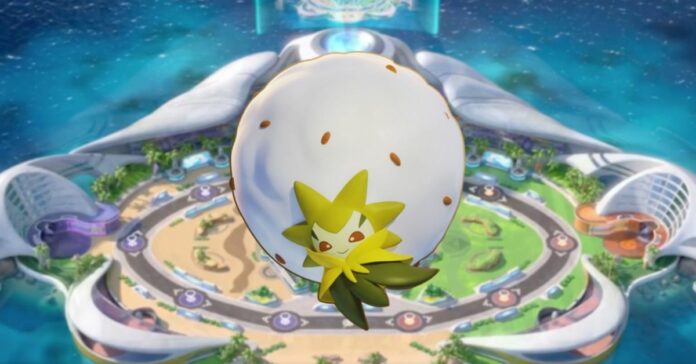 Eldegoss in Pokémon Unite is a Supporter type of Pokémon with a Novice Difficulty to play. It starts the match as Gossifleur and evolves into Eldegoss at level 4.

How to Get Eldegoss in Pokémon Unite

To obtain Eldegoss in Pokémon Unite you will need to buy a Unite License. It costs 6,000 Aeos Coins or 345 Aeos Gems. Once you bought it you will be able to use this character. Also, Eldegoss is available as one of the five Pokémon you can choose after completing the first tutorial.

At level 4 you will be able to replace Leafage with one of two Moves. Both of them will be upgraded at level 11. These abilities are:

At level 6 you may choose the one of two following Moves. It will be the replacement of Synthesis. These abilities will be upgraded at level 13.

At level 9 Eldegoss gets its Unite Move. When using Cotton Cloud Crash Eldegoss flies into the air and becomes invincible. If you use this Move again your Pokémon will dive to the ground dealing damage to enemies and restoring HP to allies.

Eldegoss in Pokémon Unite is a Supporter type of Pokémon. Its abilities provide heal and protection to teammates. As Held Items we recommend:

As Battle Item we recommend you Eject Button. It grants you additional mobility and the opportunity to escape troubles.

How to Play Eldegoss in Pokémon Unite

Eldegoss in Pokémon Unite is a good Supporter that provides buffs and healing to its teammates. At level 1 we recommend you to choose Leafage. It will help your team to get the first kill. Later you should pick Pollen Puff and Cotton Guard. These two abilities are both great choices to support your comrades in a fight. Use your Moves correctly and you will become a savior to your teammates. Good luck in your further matches.