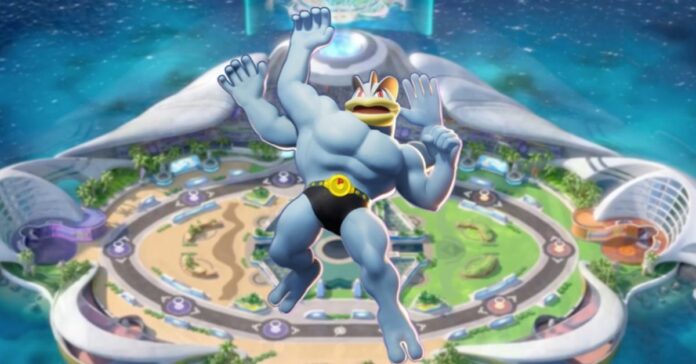 Machamp in Pokémon Unite is an All-Rounder type of Pokémon with an Intermediate Difficulty to play. It starts the match as Machop then evolves into Machoke at level 5. At level 9 it becomes Machamp. In this guide, we will tell you everything you need to know about Machamp in Pokemon.

How to Get Machamp in Pokémon Unite

To get Machamp in Pokémon Unite you will need to buy it in a shop. It costs 8,000 Aeos Coins or 460 Aeos Gems. Once you bought it you will be able to pick Machamp.

At level 1 you may choose one of two following abilities, while the other one will be given to you at level 3.

At level 5 you need to choose a replacement for Karate Chop. This ability will be upgraded at level 11.

At level 7 you can choose one of two following Moves that will be the replacement of Bulk Up. This ability will be upgraded at level 13.

At level 9 Machamp gets its Unite Move. Barrage Blow boosts the user’s Movement Speed, Attack Speed, and Defense. After the second activation launches a combo of blows that deal a lot of damage and throws opponents.

Machamp in Pokémon Unite is an All-Rounder type of Pokémon. It is a very tough character that deals good damage. As Held Items we recommend:

As Battle Item we recommend you Eject Button as it is always a good escape option. Also, X-Attack may be interesting to players that want to have more damage.

How to Play Machamp in Pokémon Unite

Machamp in Pokémon Unite is an All-Rounder. This character is a tough front-liner that charges straight to the enemy and punches its face. We recommend you to choose Bulk Up at level 1, as it gives you mobility. Then pick Cross Chop and Submission to become a real killing machine. If you have someone who can apply status conditions on your opponents then you can try Close Combat. Good luck in your further matches.