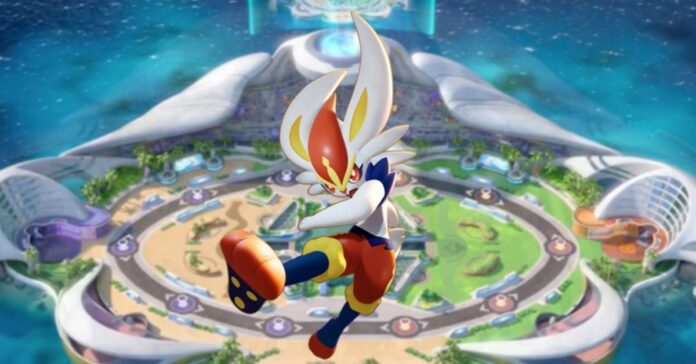 Cinderace in Pokémon Unite is an Attacker type of Pokémon with a Novice Difficulty to play. It starts the match as Scorbunny then evolves into Raboot at level 5. Finally, it becomes Cinderace at level 7. In this guide, we will tell you everything you need to know about this Pokemon.

How to Get Cinderace in Pokémon Unite

To obtain Cinderace in Pokémon Unite you will need to buy it in a shop. It costs 8,000 Aeos Coins or 460 Aeos Gems. Once you bought it you will get this character on your roster. Also, Cinderace is a day 8 reward for the “14 Day Welcome Gifts” event.

At level 1 you can choose one of two Moves, while the other one will be given to you automatically at level 3.

At level 7 you may choose a replacement for Ember. This ability will be upgraded at level 11.

At level 8 you need to choose the one of two following Moves. It will be the replacement of Low Sweep. This ability will be upgraded at level 13.

At level 9 Cindrace gets its Unite Move. Blazing Bicycle Kick throws a fireball that deals damage in a large area. Also, increases the user’s Movement Speed.

Cinderace in Pokémon Unite is an Attacker type of Pokémon. It deals a lot of damage with its Moves and basic attacks. As Held Items we recommend:

As Battle Item we recommend you Eject Button if you want to have more mobility and opportunity to escape troubles, or X-Attack if you want to deal more damage.

How to Play Cinderace in Pokémon Unite

Cinderace in Pokémon Unite is an Attacker. It deals a big amount of damage and has some good abilities combination. At level one, it is better to pick the ranged option, Ember. The next abilities work great in pairs. Like Flame Charge and Pyro Ball, or Blaze Kick and Feint. Play carefully as your character lacks vulnerability. Good luck in your further matches.