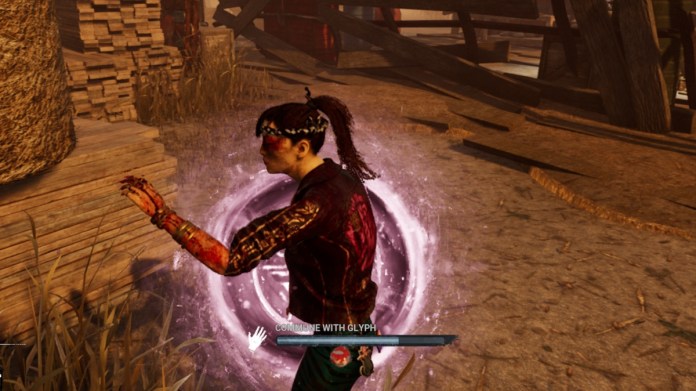 Dead By Daylight’s glyphs appear as a part of tome challenges available for both Survivors and Killers. There are 7 glyph challenges that can show up in a tome, each with its own colour. Every glyph requires either Killer or Survivor to interact with them during the match. Some glyphs are Survivor-only (blue, yellow, white, pink), and one is for the Killer only (purple). Red and green glyphs can be completed by either Killer or Survivor and are the easiest to complete. Find out more below!

What is the Pink Glyph?

The pink glyph in Dead By Daylight can be made to appear in the game by selecting the correct challenge in the tome. A match contains one Pink Glyph to find and interact with. Once the challenge is complete, the player is rewarded with Rift Fragments and Bloodpoints.

Communing With the Pink Glyph

This challenge can be completed only by the Survivor. A Pink glyph appears anywhere on the map and can be found by following a strange but distinct sound. When you see it, crouch and hide behind an object. If it ‘sees’ you for too long (around 5 seconds), then you will be affected by the Exposed Status (meaning the Killer will be able to down you with one hit).

Approach the Pink Glyph quickly and commune with it before it exposes you. If it does expose you, it will disappear and you will have to find it again. Players can ‘commune’ with the glyph by using the interaction button. This interaction does not take very long, only around 5 seconds.

Related: When is Dead By Daylight Chapter 26 Coming Out – Answered

You do not have to escape the match to complete the challenge, so do not worry if you end up being sacrificed to the Entity. You will still gain your reward.

That is all you need to know about this new glyph challenge in the Dead By Daylight rift tome! Next up, why not find out about other glyph challenges? Good luck!

How to Get the Pink Glyph in Dead By Daylight