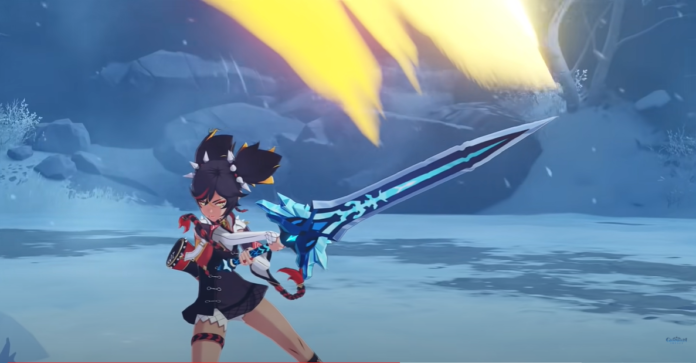 While we are uncovering each and every new content added to Genshin Impact coming with update 1.2, we have sorted a list of weapons that players can get after completing certain quests, solving mysteries, collecting raw materials, and other different methods.

As of now there are four new weapons coming with Genshin Impact 1.2 Update.

Other Guides on Genshin Impact 1.2 Update

The Snow-Tombed Starsilver Claymore in Genshin Impact is an ancient greatsword stored that was stored between frescoes.

To get the sword players must first reach the top of Dragonspine peak by unsealing the air currents blocking the path. Next, players must delve deeper into the depths of Dragonspine mountain(accessed from top) to find the clues and mysteries left by an ancient civilization.

Though we are not here to talk lore and such things, to get the weapon players must solve a series of puzzles found within the mountain(we will add step by step guide to solve the puzzles after update 1.2’s release).

Completing the puzzles will reward the players with the Snow-Tombed Starsilver Claymore.

The road to claim the snow tombed starsilver claymore is tough, though, once players get their hands on this new claymore and pair it with a Cyro character – they can shred enemies in seconds.

Snow-Tombed Starsilver Claymore comes with a base ATK DMG of 44, and the secondary stats on this weapon is Physical DMG% increase by 7.5%. The special ability of the weapon is called Frost Burial and it shares the same description as Dragonspine Spear.

When players hit the enemies with normal and charged attack. There is a 60% chance of forming and dropping an Evenfrost icicle above enemies, that deals 80% AoE ATK DMG. Moreover, the opponents dealt with Cryo damage are dealt 200% ATK DMG.

The special ability of Dragonspine Spear triggers once every 10 seconds.