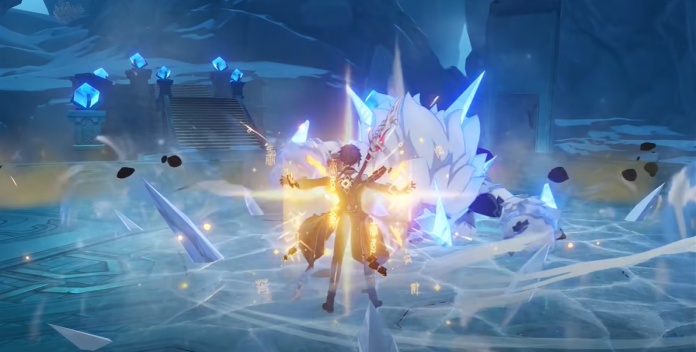 Weapons and Artifacts are the heart of combat in Genshin Impact. Despite having a star-system that denotes the power and use of a playable character – it’s the weapons and artifacts that decide if a character is useful or not.

Genshin Impact Update 1.1 is coming to an end now, and, players are preparing for the next major update – set to release on December 23, 2020.

Earlier this week, the developers miHoYo revealed a trailer for an upcoming seasonal event “The Chalk Prince and the Dragon” that is set to release with Genshin Impact 1.2 update. The trailer revealed many major and minor details like four new weapons, new playable characters, a new location – Dragonspine, new enemies, and much more.

We have enfolded a list of guides that will prepare you for Genshin Impact 1.2 update.

Now moving to the main topic, as mentioned earlier we have four new weapons(showcased below) coming in Genshin Impact with the update 1.2, moreover, all of the four weapons are free to get and can be claimed by fulfilling certain criteria.

In this guide, we are going to talk about the requirements, pre-requisites that players must fulfill to get the latest four-star polearm weapon – the Dragonspine Spear.

How to Craft Dragonspine Spear in Genshin Impact

The exact drop location for the Dragon’s teeth is not yet known as Genshin Impact update 1.2 is yet to release, though, players can harvest the dragon’s teeth from dragon fairies(spotted in the above image), also we do know what players have to do once they get the Dragon’s Teeth.

In the foothills of the Dragonspine Mountain – players can find a Weaponsmith at a camp who can craft Dragonspine Spear if provided with a Dragon’s Teeth.

The Dragonspine Spear is a polearm best suited for Cryo High DPS builds. It is a four-star polearm with base ATK 41, secondary stat being ATK DMG % increase and the special ability – Frost Burial.

Dragonspine Spear special attack Frost Burial is triggered when players hit the enemies with normal and charged attack. There is a 60% chance of forming and dropping an Evenfrost icicle above enemies, that deals 80% AoE ATK DMG. Moreover, the opponents dealt with Cryo damage are dealth 200% ATK DMG.

The special ability of Dragonspine Spear triggers once every 10 seconds.

Genshin Impact Update 1.2: How To Get Dragonspine Spear