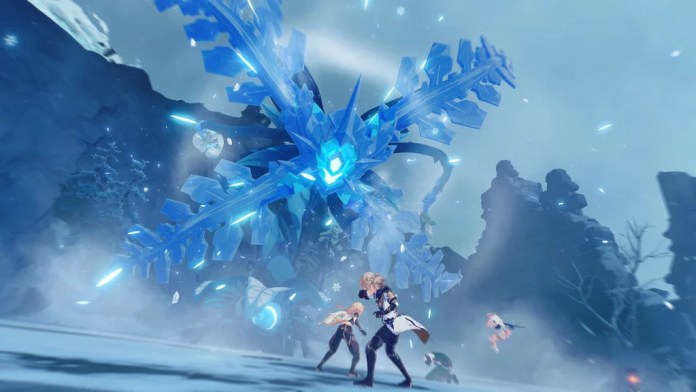 Being a live-service roleplaying game, Genshin Impact offers a plethora of enemies constituting of normal enemies like Hilichurls and their nuanced versions, slimes, a little tough to beat – Fatui, Treasure Hoarders, Rigsivines, etc. There is a lot of variety Genshin Impact has to offer when taking enemies into account. And, with the introduction of the recent Genshin Impact 1.2 update, we have a new set of enemies in the game for the traveler and adventurer’s to defeat.

The Resurgent Cryo Rigsivine in Genshin Impact is an event boss that players have to fight and defeat in ACT IV of the Chalk Prince and the Dragon event. While players are well versed with the ways of defeating the existing Cryo Regsivine, the new addition – Resurgent Cryo Rigsivine comes with different phases, attack patterns, environmental damage(thanks to sheer cold accumulation), the less threatening slime mobs that try to hinder as well as support the battle.

Unlike the other boss battles in Genshin Impact, the Resurgent Cryo Rigsivine has a total of four phases.

In the first phase of the battle, the Resurgent Cryo Rigsivine uses icicle attacks that rain from above dealing high damage(for 20 seconds), while hiding behind a shield projected by frost thorns.

In this phase, players have to dodge the icicle attacks(indicator appears on ground) and defeat the slimes – that drop Scarlet Quartz, to break the frost thorns and un-shield the resurgent cryo rigsivine.

The phase of the resurgent cryo rigsivine is the most difficult one, as in this phase the boss uses a wide AoE attack indicated by a text warning “The Cryo Rigsivine’s Power is about to erupt“, to one-shot any character.

Though, its nothing but a gimmick as a seed of winter always spawns before the attack, players have five seconds to reach and destroy the seed to deploy a shield that protects from the AoE attack, as well as, it gives you around 10 seconds to heal your team members, eat food items for buffs, etc.

At the end of the attack when your shield is dissipated, the resurgent cryo rigsivine uses three consecutive faceplant attacks.

The fourth phase repeats the third phase attacks 3 successive times – granted players haven’t broken the corolla shield. Use similar tactics to get past this phase.

Here is a video that will help you defeat the resurgent cryo rigsivine.

A healer in the Resurgent Cryo Rigsivine battle is very important, and so does Pyro and Anemo element users. We recommend players to use Bennet as the healer, and if you lack bennet – then go for Barbara(though get ready to get frozen and stuck).

Use two Pyro users to get the elemental resonance benefit – increase in 25% ATK power. Anemo swirl attacks are good for destroying the resurgent rigsivine’s core shield.

Keeping the above factors and availability of playable characters in mind, the best team one can arrange is of Anemo Traveler, Bennet or Barbara, Amber, and Xiangling.

And, for players who have five-star characters with better gear can try out different combinations – keeping the aforementioned tips in mind.

In terms of weapons – make sure to equip the Festering Desire if your main DPS is sword user. Though, a bow user is best suited for this battle.

How to defeat Resurgent Cryo Rigsivine in Genshin Impact