Home Guides How old is Noelle in Genshin Impact 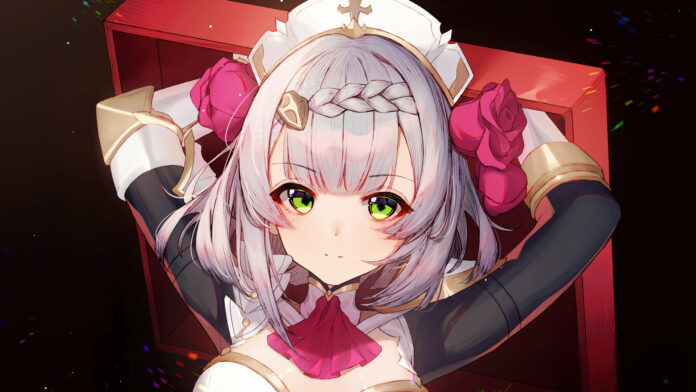 Genshin Impact 1.4 update is currently underway, and with that, we have a plethora of new content for players to dive right into. Version 1.4 update focuses around the Windblume Festival of Mondstadt – A counterpart to Liyue’s Lantern Rite Festival. While players are excited about the new major event, one of the main limelight of the Genshin Impact 1.4 update is the new Hangout Events. Noelle is one of the featured characters in this Hangout Event. Most of the players have spent time with her, and now they are eager to know how old is Noelle in Genshin Impact.

Noelle is a four-star Geo user from Mondstadt whose weapon of choice is a Claymore. She is a defence character. Her elemental skill is called Breastplate and what it does is “Summons protective stone armour, dealing Geo DMG to surrounding opponents and creating a shield. The shield’s DMG Absorption scales based on Noelle’s DEF.”

Her elemental burst attack is called Sweeping Time and when players use it “Noelle gathers the strength of stone around her weapon, Noelle strikes the opponents surrounding her within a large AoE, dealing Geo DMG.”

Now with the basic details on Noelle being aside, let us talk about how old is Noelle in Genshin Impact.

Noelle is a young woman who aspires to become a Knight of Favonius. She is kind and she hates the fact that she has Geo vision as it is the polar opposite of Anemo. According to Noelle’s personality description that is mentioned below – Noelle refuses to drink alcoholic beverages until she becomes of the proper age.

The seven different regions of Teyvat are inspired from seven different countries of real world. Mondstadt is the fantasy version of Germany. The legal drinking age in Germany is 16 years.

Keeping that in mind, we can say that Noelle is around 15 years old in Genshin Impact.