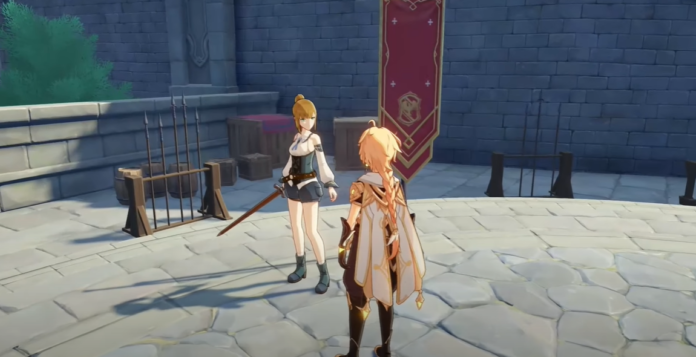 Being a roleplaying game, Genshin Impact offers a plethora of daily quests, domains, world bosses, minerals and ascension items, etc – that players have to grind in order to receive a free reward, or a rare exquisite yet useful gear.

On completion of each daily quest – players are rewarded with rewards like Primogems, Mora, Adventurer XP, and other in-game items. And, if a player completes all four daily quests – then talking to any of the two Adventurer’s Guild(Mondstadt and Liyue), the players get additional Primogems and other rewards.

In today’s guide we are going to talk about one particular daily quest – that takes place in the City of Mondstadt. Unlike any other daily quest, this one requires creativity and particular set of characters. So, without any further ado, let us move on to the main guide.

However, Ellin The Wannabe Knight Daily Quest is somewhat special – as in this daily quest players have to destroy a total of five dummies in mere two seconds. Moreover, these dummies are separated from each other by a pretty significant distance.

But, this doesn’t mean the quest is impossible to complete. In fact, completing Ellin The Wannabe Knight Daily Quest in Genshin Impact is pretty easy. Here is what you have to do-

Step 1.) Switch to Geo Traveler – Aether or Lumine. If you are using Anemo, you can switch to Geo element by visiting any of the Statue of Seven in Liyue Region(Geo Archon)

Step 2.) Now use Normal attacks on all the five Dummies and lower the HP by 5 or 10(Takes around 3 to 4 swings, depending on your gear and level). Make sure not to destroy any of the dummies.

Step 3.) Once you are done with the above steps, stand at any of the corners – i.e near the first dummy or the fifth dummy.

Tips – If you have characters like Xiangling, Zhongli, etc, who have a wide range AoE ability then completing this daily quest becomes more easier.