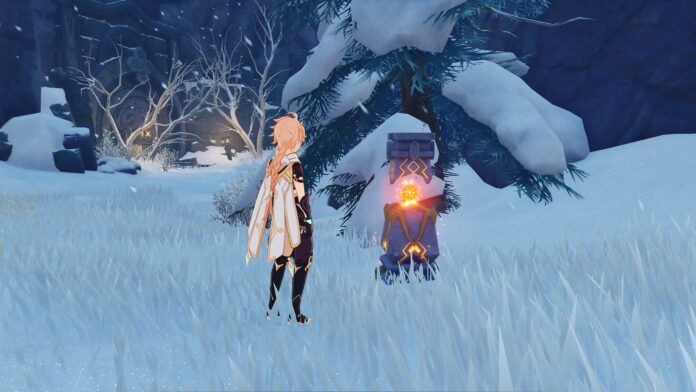 Now, moving back to the topic. Genshin Impact’s 1.2 update is going to introduce a brand new location – Dragonspine in the game. And, for players who don’t know – Dragonspine is a mountain with an unforgiving environment marked by deep snow, sheer cold, poisonous blood, and monsters.

Upon entering the new location Dragonspine of Genshin Impact – Players trigger a new gameplay mechanics called SubZero Climate, though the players know it by the name of Sheer Cold.

What Subzero Climate in Genshin Impact does?. The answer to this question is simple when players enter the new location a new meter above their HP bar shows up. It is a meter that showcases the accumulation of sheer cold – that happens because of the sub-zero climatic condition of the Dragonspine mountain.

As soon as the sheer cold status meter is full, the players start losing HP(health points). In addition to that, climatic changes like snowstorms or simple swimming can accelerate the accumulation of sheer cold.

With all this in mind, the first question that many of us have is – How to counter Sheer Cold in Genshin Impact?. To counter sheer cold in the Genshin Impact Dragonspine location, players have to use the newly introduced heat sources – available all across Dragonspine, as well as, some portable heat sources can be crafted too.

Heat Sources like Bonfires, Ruin Braziers, Teleport Waypoints, Statues of The Seven, etc will help players to remove the sheer cold accumulation. Plus there are portable heat sources as well as special food items like the Ghoulash, that players can craft and use to stay warm in Genshin Impact Dragonspine Location.

For players who don’t know how to get the special food item Ghoulash’s recipe – here is what you have to do. There is a new quest called “Ah, Fresh Meat!”, upon the completion of this new quest – the players are rewarded with a recipe for Ghoulash.

Related | Genshin Impact Version 1.2 Event: The Chalk Prince and the Dragon, All Major Details you need to know

How to stay warm in Genshin Impact Dragonspine Location