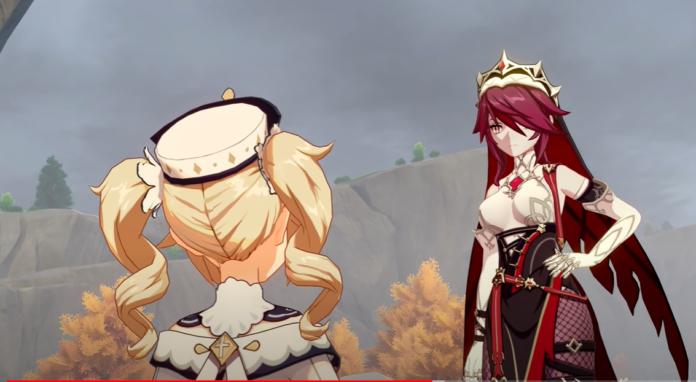 Genshin Impact version 1.1 is nearing its end, the next major update 1.2 is right around the corner, and players are eagerly waiting for the new wave of content. The developers miHoYo will be rolling out Genshin Impact’s new update on December 23, 2020.

[UPDATE – January 3, 2021] – New leaks suggests Rosaria might come with Genshin Impact 1.4 update, alongside Venti’s banner(recurring). We will update this article will further information once we confirm everything. Thanks!

While we are getting new playable characters – Albedo and Ganyu, a new location – Dragonspine, New enemies, Dungeons, World Bosses, and much more – the most intriguing part of Genshin Impact 1.2 update is that – with it, the developers are finally introducing Genshin Impact update pre-download feature on PC, later followed by Mobile and Console support(TBA).

Yesterday, we also got the final Genshin Impact event – before version 1.1’s end. The new event is called A Thousand Questions With Paimon. It is a quiz event, where players have to answer 10 questions and for each correct answer, they get 5K Mora. We have prepared handy guides for the event that you can check down below.

Rosaria is a four-star Cryo user whose weapon of choice is a polearm. She is also a “Nun” at Mondstadt cathedral who also seems to be one of the rumored characters that were in-line to get released.

Genshin Impact Version 1.2 comes with a new seasonal event – The Chalk Prince and the Dragon that will feature Rosaria as an NPC. This was confirmed during an official Livestream event from miHoYo that was aired right after the Genshin Impact‘s version 1.2 trailer release.

Now, let us be direct – Rosaria is without a doubt a playable character in Genshin Impact. The main question that players with big brains have is – what is the role of Rosaria in “The Chalk Prince and the Dragon” event. Though for simple players like us, the main question that we have in our mind is – When can we get our Waifu Rosaria?.

There is also a probability that Rosaria may come with Albedo’s banner – because we did get Childe and Diona in the update 1.1 banners, later followed by Zhongli and Xinyan. We should not ignore the fact that Albedo plays a huge role in The Chalk Prince and the Dragon event and still he’s banner is the first one to release.

While we were trying to figure out Rosaria’s banner release date, we were convinced that if she comes with update 1.2 then it would definitely be Ganyu’s banner. Though both Ganyu and Rosaria being Cryo users – it seemed weird.

Still, we will be sticking with our speculated release dates for Rosaria’s banner. And, that is January 13, 2021. Also, it will be no surprise if the devs brought her in the game earlier with Albedo’s banner.

We will update the article if there is any official news regarding Rosaria’s banner launch date.