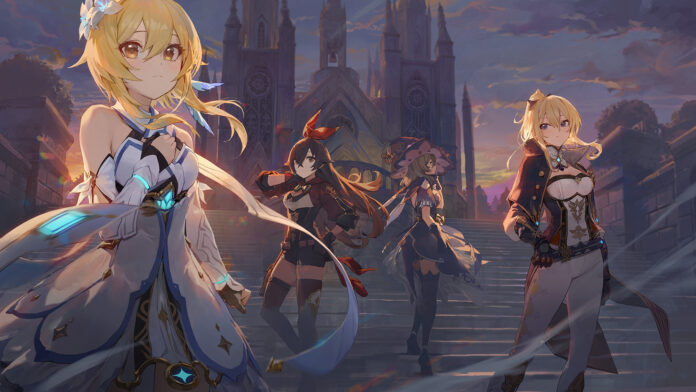 At the very beginning of the game, players have to choose between the Traveler twins – Lumine and Aether. A team in Genshin Impact comprises of four playable characters, and during the Genshin Impact intro quest three other characters, namely, Amber, Kaeya, and Lisa join the team.

Amber is a pyro user with Bow as a choice of weapon. She is one of the most, if not the most underrated characters in Genshin Impact, despite her endless potential. Amber joins the team, right at the very beginning of the game, during the prologue mission.

Kaeya is a Cryo user with the sword as a choice of weapon. He is a very useful character in terms of utility. Just like Amber, Kaeya joins the team during the early part of the game, specifically, during the intro quest, Crash Course.

Lisa is an Electro user with Catalyst as a choice of weapon. But, as per the Genshin Impact community, Lisa’s main weapon is her Japanese Voice lines while performing physical work, like climbing, jumping, etc. Jokes apart, similar to Kaeya – Lisa joins the team during the early game, after players complete the mission – Sparks Amongst the Pages.

Barbara is a hydro user as well as a powerful healer. Just like Lisa, her choice of weapon is the Catalyst. She was available as a free character before update 1.1, when players reached Adventure Rank 20, they were rewarded with Barbara. Though, one and only major pre-requisite for redeeming her was that the Genshin Impact accounts should be created before Update 1.1’s launch.

Characters that were free in Genshin Impact, but now they are not

The character mentioned below were available as a free character for a fixed period of time.

Xiangling is a Pyro user with Polearm as a weapon of choice. Players were able to claim Xiangling for free once they cleared the Spiral Abyss till Floor 3 Round 3(Adventure Rank 20 or above).

Fisch is a Electro character with Bow as a weapon of choice. She is the most recent playable character that was made available for free during the Unreconciled Stars Event.

Noelle – Paid, Yet Treated as a Free Character

Noelle is a Geo user with Claymore as a choice of weapon. Also, she is a guaranteed drop in the beginner’s wish banner. Therefore, she is quite often treated as a free playable character.