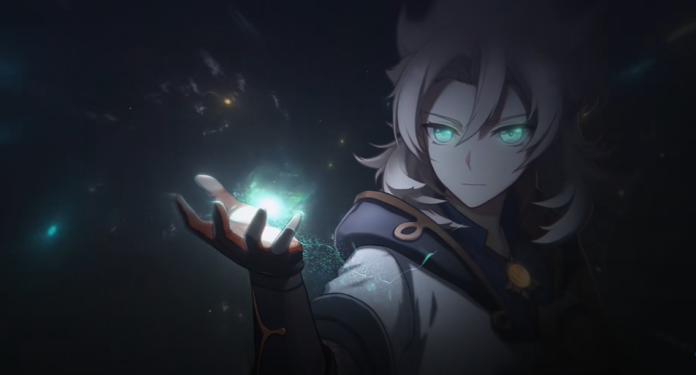 Earlier today, miHoYo revealed the two Event Wish banners coming to Genshin Impact with Version 1.2 update. The brand new banner for the five-star Geo user Albedo is called Secretum Secretorum and the other is nothing but a nuanced version of the existing Epitome Invocation banner- commonly known as the Weapons banner.

Before moving forward with the two banners, let us have a recall of all the weapons and playable characters we are getting with the Genshin Impact 1.2 update. So, in terms of playable characters, we have five-star Geo user Albedo – who serves a major role in the chalk prince and the dragon event and the other one is five-star Cryo user Ganyu.

In terms of weapons, we have Frostbearer, Dragonspine Spear, Snow-Tombed Starsilver, and Festering Desire. All of the four weapons are obtainable in-game. Now, without any further ado let us move on to the main topic.

The event wish banner Secretum Secretorum features the brand new five-star playable character Albedo and three of the existing characters, namely – Fischl, Sucrose, and Bennet. Albedo’s banner starts from December 23, 2020, after the Genshin Impact version 1.2 update and it will end on January 12, 2020, at 15:59:59(Server Time).

As for the time duration for which the updated Epitome Invocation banner will be there in Genshin Impact is as follows – the banner will go live on December 23, 2020, after the Genshin Impact version 1.2 update and it will end on January 12, 2020, at 15:59:59(Server Time).

Note: All the weapons and characters featured in Genshin Impact’s event wish banner have a boosted drop rate.

Should You Roll For Albedo’s Banner in Genshin Impact?

Now, let us be honest here. Most of the Genshin Impact players are waiting to perform wishes on Ganyu’s banner – which goes live on January 13, 2021. Though, should you be skipping Albedo’s banner for Ganyu? We think its a grave mistake. Players should definitely roll for Albedo.

Now, hear us out!. In the upcoming Genshin Impact 1.2 update, Geo Shields is the meta. If you have seen the new domains, enemies, etc – you can understand the value of a defensive skill. The new domains and enemies are desined to hurt more, they are difficult than any other domain, plus the domains have instances where the player character has to perform a task, while being aimed by five to six laser like ancient weapons.

Albedo’s skills are going to comes in Handy – when exploring and clearing the new Dragonspine location. Though, if you have a good Geo user like Zhongli or Ninngguang Onee-Sama then you can skip Albedo’s banner – keeping in mind that you might miss the chance to max out one of the strongest characters of Genshin Impact – Fischl.

If you are free to play player then we recommend you to wait for Ganyu’s banner. The same goes for players who already have some good Geo characters.