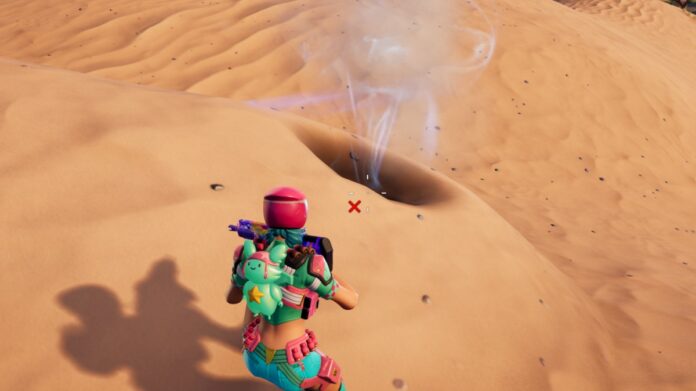 Fortnite’s favourite dinosaur creature is making itself known with the fourth secret Klombo challenge! This week, players can seek out the hidden Klombos and ride their geysers as they spray into the air. Find out more below.

Where to Find the Secret Klombo Geysers

The first secret Klombo challenge asked players to seek out the first of the secret Klombos, hiding beneath snowy mounds. Klombos breathing could be heard and seen, but nothing more… Until now.

The second quest saw players picking Klomberries from the newly-grown bushes, and consuming them. We then went on to discover yet more secret Klombos, hiding in sandy mounds!

Finally, we are starting to see more from the Klombos. As many players will remember, one feature of the giant creatures is the fact their blowholes could be used to be thrown into the air and glide away. It seems these blowholes are working again, even if the Klombo is still beneath the land.

The fourth secret Klombo challenge asks players to ride a Klombo geyser 3 times to gain some bonus XP! Any of the Klombo mounds can be used, with three located near Logjam Lumberyard, and three in the sandy areas.

Where to Find the Secret Klombo Geysers in Fortnite