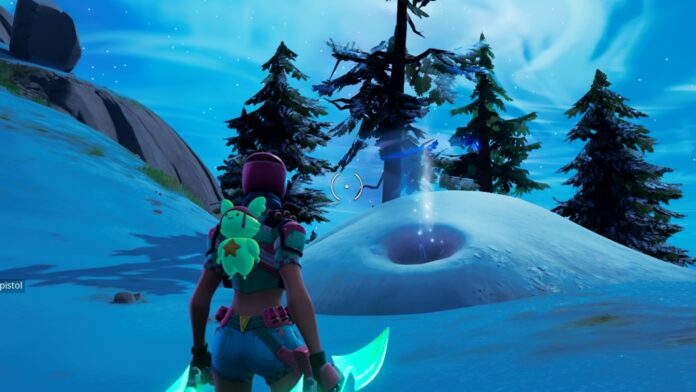 Fortnite Chapter 3 Season 2 saw some great new additions and changes but it also took away some of our favourite parts of season 1, including the beloved Klombos. Klombos were enormous dinosaur-like creatures that slowly roamed the world of Fortnite, eating Klomberries, sucking up weapons and other items and giving players better items in return. They were relatively peaceful animals, unless provoked, and could not be killed. Players would use their blowholes to launch into the sky and glide away, or just sit on their backs for a rest. When Chapter 3 arrived they were noticeably gone and players asked if they were hiding, hibernating, or removed completely?

It turns out the Klombos are still around! Although whether they are hiding or just hibernating is an unanswered question right now. There is a secret challenge for players who want to try and uncover the mystery of the disappearing Klombos, and all they have to do is find the 3 Klombo-sized mounds in the snow. They can be easily recognised by the deep breaths and steam coming out of a hole in each huge mound.

They can all be found near Logjam Lumberyard. The first is just north west of Logjam:

Simply walk over the mound and the challenge will accept the discovery.

The second mound is north of the first:

Walk over the mound to ‘discover’ the hidden Klombo.

The final mound can be found to the east of the second:

Walk over the mound and gain your final part of the challenge and some bonus XP!

Players gain 10,290 XP for this secret challenge so it is well-worth doing! It also prompts us to wonder if there are any other secret XP challenges in this chapter? Let us know in the comments below if you have discovered any bonus features in this chapter! Good luck.