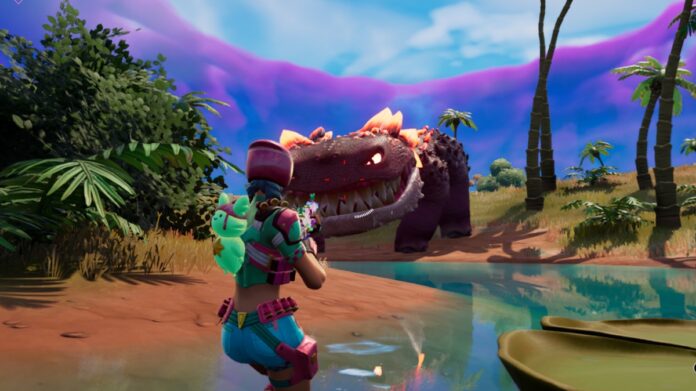 Klombos are in Fortnite after a long-anticipated wait. The giant dino creatures can be found walking around the map near water sources such as lakes and rivers, and even near the coast. They are big and purple, with big blue eyes and huge teeth. They don’t attack you when you are nearby, unlike other wildlife around the Fortnite map, but you can start a fight with them (although why would you even want to?).

Can Klombos be Killed in Fortnite?

You can attack a Klombo by shooting at it, but no matter which weapon you choose, you only deal 1 point of damage. When you shoot at a Klombo, it turns a dark red-purple with red glowing eyes and scales! Watch out—the Klombo is now VERY angry with you.

The Klombo will charge at you, dealing damage if they come in contact with you. They also throw out a few lava balls which can cause damage.

As they do not have a health bar, and weapons seem to do little damage (other than making them mad), it appears that you cannot in fact kill a Klombo. They exist to act as gentle giants whose blowhole helps shoot you into the air to glide across the map.

After a while, they calm down and become a normal purple color with blue eyes. You can also encourage them to calm down by feeding them Klomberries.

If you feed them a few berries, they will give you some loot!

Let us know in the comments below if you have come across one of these amazing creatures!

Can you Kill Klombos in Fortnite Chapter 3? – Answered