Home Game Guides Where to Find Dinosaurs in Fortnite Chapter 3 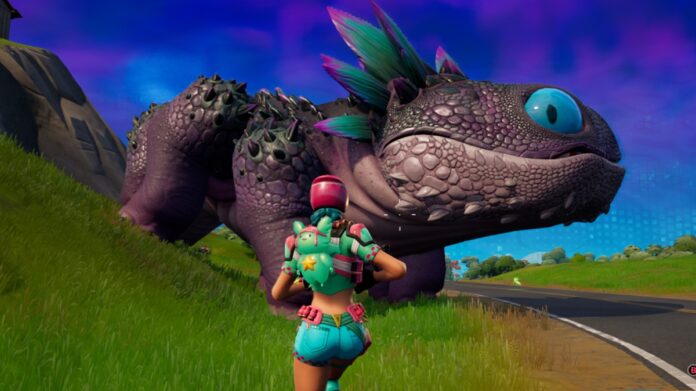 Klombo have arrived in Fortnite and they are ADORABLE! These gentle giants will only attack if provoked, so be careful of any stray bullets when one is nearby. Other than that, you have nothing to fear from these amazing creatures—in fact, they can be pretty useful.

When you are near a Klombo, you will hear a friendly tune is playing, and you may hear the creature snuffling or grumbling. Round the corner to find a Klombo going for a walk, minding its own business. If you climb up its tail and onto its head, you will see a blowhole. Stand on the blowhole to be blown up into the air—a great way to get across the map!

Unlike the sharks in Fortnite, the Klombo won’t pick a fight with you if you are nearby. You can even climb aboard the dinosaur via its tail and sit on its back for a slow and steady ride. If you do hurt a Klombo, they will turn red, spurt lava from their blowhole, and attack back, so be warned!

Where are the Klombo in Fortnite Chapter 3?

Klombo spawn randomly, so you may not find one in the same place regularly. It seems like they prefer being near a body of water, so they spawn less in the desert sections of the map, but can be found near the coast or by lakes and rivers. We have found one in the lake near Tilted Towers, one between The Daily Bugle and Coney Crossroads, and another at the body of water between Condo Canyon and Rocky Reels.

Let us know in the comments below where you have managed to find a Klombo!

Where to Find Dinosaurs in Fortnite Chapter 3