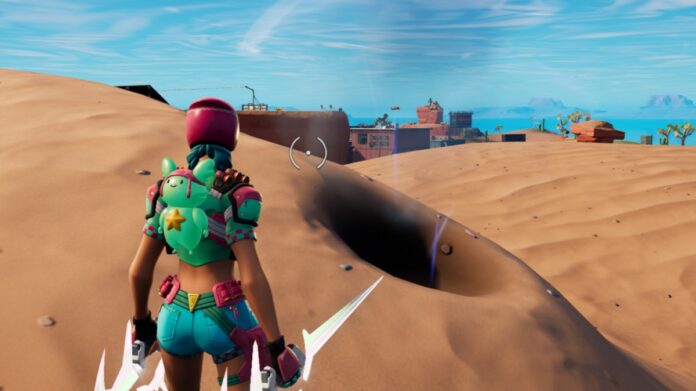 Fortnite’s favorite dinosaur creature, Klombo, has been making itself known this season in secret and subtle ways. The first secret Klombo challenge saw players search out snowy mounds where Klombos were hiding. Next, we were sent out to collect Klomberries from the newly fruited bushes. The third secret challenge asks players to seek out more Klombo mounds. This time, they are hidden in the sand! Find out the location of these sand mounds which have been hiding Klombo in our guide below.

Players can recognise the sandy mounds where the Klombos are hiding by the dark hole that appears on the side. These can also be seen while gliding. The hole has steam escaping and looks like it is breathing… It is possible to hear the breath-like sounds from nearby. Running over the mounds activates the challenge instantly.

The first of the sand mounds hiding Klombo is north west of Synapse Station:

The next one is south of the hut, near a pond between Synapse Station and Chonkers Speedway:

To complete the challenge, players just need to walk over the mound where Klombo’s steam is escaping and gain some bonus XP!

How to Complete the 3rd Secret Klombo Challenge: Sand Mounds