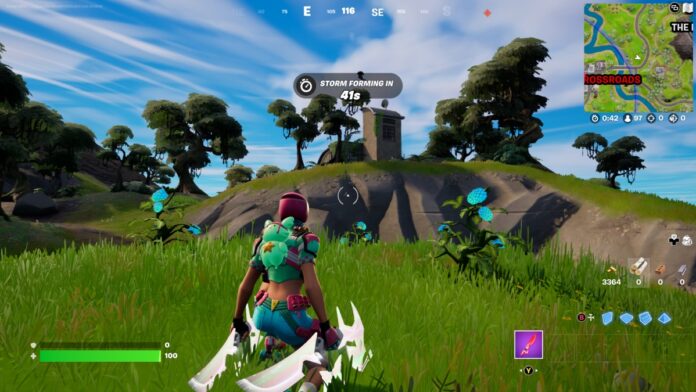 The Klombo Secret Challenges continue! As many of you already know, Klombos disappeared in the last update and players could no longer find them wandering the map looking for items and weapons to eat. The Klomberry bushes were also bare, so there were no fruits for us to eat. Until now! With the latest patch, it seem Klomberries have returned, and with them comes a second part of the Secret Klombo Challenge.

The first part of the Secret Klombo Challenge was to discover three hidden Klombos, snoring beneath the snow near Logjam Lumberyard. Find their exact locations here if you have not already discovered them. The next part of the challenge is to gather 10 Klomberries.

The bright blue berries can be found in their usual spots on bushes, but they are also now found in Coolers, and can be dropped by players. Any of these count as ‘gathering’ the berries as long as they are different Klomberries you are picking up. You cannot just pick up a few, drop them, and pick them up again. They give you 10 HP/Shield, so keep them handy for when you need them most!

The Klomberry bushes are positioned in groups of 3 in the following locations:

Gather 10 Klomberries to earn some bonus XP, and await the next part of this secret challenge! Maybe soon we will see the much-loved Klombos back in Fortnite.

How to Complete Part 2 of the Secret Klombo Challenge