Home Guides Terraria: How to Summon and Defeat the Brain of Cthulhu 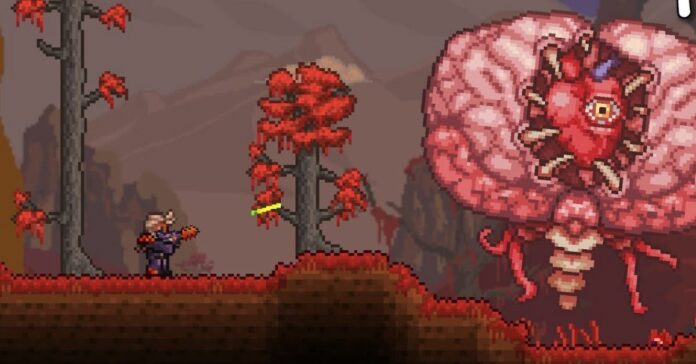 The Brain of Cthulhu is the boss in Terraria, which is similar in behavior to the Eye of Cthulhu but has a larger size, less health, and quite good armor. Also, the boss has his minions, which provide him with invulnerability to damage.

Like most bosses, the Brain of Cthulhu can go through walls and teleport. In this guide, we will tell you everything about this Terraria boss, including how to summon it and a strategy to kill it.

How to Summon the Brain of Cthulhu in Terraria

There are two ways to summon the Brain of Cthulhu to the Terraria world:

• With the help of a bloody spine.

• Break three hearts of the crimson.

To summon a boss using the first method, you first need to craft a bloody spine. To craft an item, you need 15 Vertebra, 30 Vicious dust, and Demon Altar or Bloody Altar. In the mobile version, 15 vertebrae and a Demonic Altar or Crimson Altar.

RELATED: Witch Doctor in Terraria Mobile: Where to Find and Why They Are Needed

Vicious Dust can be purchased from Dryad during the Blood Moon, and vertebra can be obtained by killing Creamers, Demonstrators, and Blood Crawlers, with a 33.33% drop rate. After all the materials are collected and the summoning item is crafted, you can spawn the boss.

In order to summon the boss using the second method, you need to find 3 hearts of the crimson and break them. After the destruction of hearts, a special message in the bottom will appear.

After all three hearts are broken, the Brain of Cthulhu will be summoned to the world.

How to Defeat the Brain of Cthulhu in Terraria?

Before summoning and engaging in a battle with a boss, you need to acquire suitable equipment for battle.

For combat, it is advisable to take the Rotted Fork and the Crimson Rod. You can also use potions such as iron skin, regeneration, heal, etc. Any type of kit can be used as armor, the main thing is that the total of the equipment should be 10 or more. You also need to take Soup or Pumpkin Pie, Platforms, Stack of Earth, and Bonfire.

RELATED: Terraria: How to Trigger the Martian Invasion

Before the start of the battle, you need to build a rectangle of 40 by 30 blocks from the ground and put a fire in the middle. Place a pair of platforms at a distance of five blocks from the bottom of the rectangle and use the crimson wand to create a bloody cloud. And only after all the preparatory work has been completed, you can drink potions, soup and spawn the Brain of Cthulhu.

During the first stage of the battle, you need to cope with the minions of the Brain of Cthulhu. To do this, you need to stay away from the brain, from time to time, with the help of a wand, renew the bloody cloud, which will deal with the small creatures, and also deal additional damage with the help of a Rod. The main thing at this stage is to monitor the health level and from time to time heal yourself.