Home Guides Terraria: How to Trigger the Martian Invasion 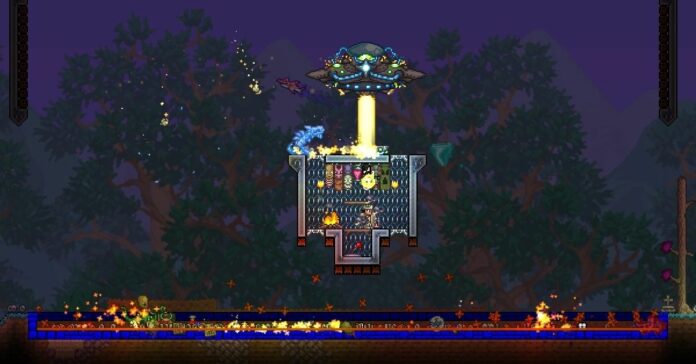 How to Start Martian Invasion in Terraria?

To make the event possible, first, you should kill Golem, after which a Martian probe appears in the world. Golem is the boss of the underground jungle, which can be summoned with the help of the battery and Lihzahrd Altar, but only after the death of Plantera.

The Martian probe appears in any part of the map, except for the central part, and immediately begins to fly and scan the surface below it. To cause Martian invasion, it is enough just to find this probe and let it scan you. You can understand that the probe is scanning you by its color. If it changed its color to red, then the probe found you. If you kill this probe, then the Martian invasion will be prevented, but there is a possibility that it will appear on the same day.

RELATED: How to Summon and Defeat the Empress of Light in Terraria

After the probe finished scanning you, it flies away and the message “Martiansareinvading!” appears. It will indicate that the Martian Invasion event has begun, and flying objects will begin to appear in the background.

As in similar modes, the main forces of the enemy appear in the central part of the map, so before starting the event it is best to build a small arena and collect enough powerful equipment. Weapons that have the homing ability are also best suited.

If you wish, you can once again start Martian Invasion in Terraria by looking for another probe. You can also use the battle potion and water candle to increase the chance of its spawning.