Home Guides Witch Doctor in Terraria Mobile: Where to Find and Why They Are... 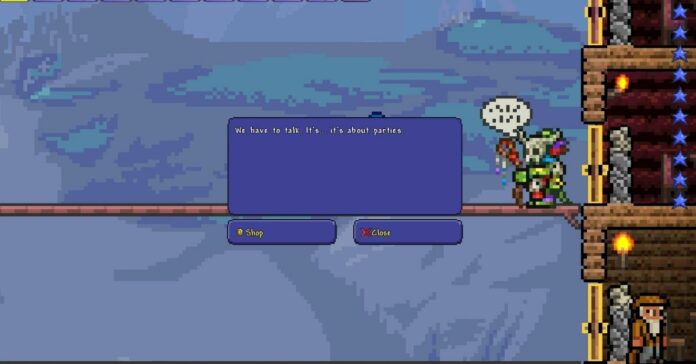 The Witch Doctor in Terraria mobile is an NPC specializing in totems and natural items. It may spawn before the hardmod. The witch doctor looks like a lizard, so his favorite place is the jungle. He uses a blowgun with darts to defend himself. After death, it is reborn in a few days. In this guide, we will tell you how to summon the witch doctor in Terraria Mobile and why he is needed.

How Do I Summon a Witch Doctor in Terraria Mobile?

The witch doctor cannot be found, he moves into the house himself, subject to certain spawn conditions. To get him, you need to kill a queen bee. After defeating the queen, you need to build a room with a door, good lighting, one chair, and a table, and then the witch doctor will appear.

What Is the Right Home for a Witch Doctor?

For greater convenience, you should immediately build a house for the healer in the jungle. In this biome, he unlocks the entire range of goods, as well as increases the level of happiness, which can potentially lower prices. If the conditions of the house are met (chair, table, lighting, door, walls), then the doctor will move into the house. You can place a dryad and a guide next to him. This will increase happiness and help you get a jungle pylon faster.

RELATED: Terraria: How to Trigger the Martian Invasion

What Does Witch Doctor Sell?

The witch doctor sells items related to nature and totems. There are 4 classes in Terraria: Warrior, Shooter, Mage, and Summoner. The Witch Doctor is one of the most important NPCs for Summoners, as he sells staves and armor with good bonuses and defenses for this class.

In order to consider all the goods of the doctor, it is worth building a house in the jungle. The jungle significantly increases the number of goods, some of them can become key ones (like tiki armor).

The next row of items will open after the player defeats Plantera. The battle will not be easy, you should build a large arena to avoid the boss attacks more easily.