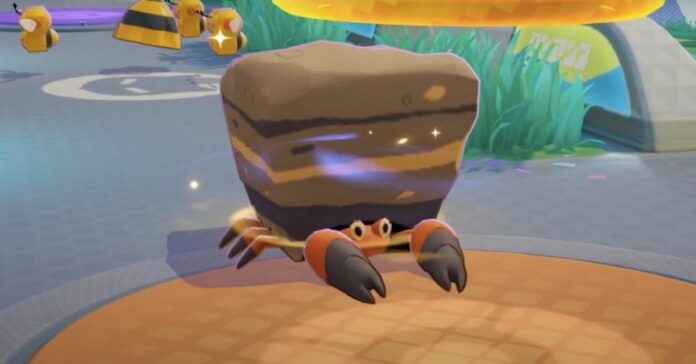 Crustle in Pokémon Unite is a Defender type of Pokémon with a Novice Difficulty to play. It starts the match as Dwebble then evolves into Crustle at level 4. In this guide, we will tell you everything you need to know about Crustle in Pokemon Unite.

How to Get Crustle in Pokémon Unite

To get Crustle in Pokémon Unite you will need to buy it in a shop. It costs 8,000 Aeos Coins or 460 Aeos Gems. Also, you may obtain the crab by completing all seven steps of the Beginner Challenge.

At level 1 you need to choose one of two following Moves, while the other one will be available to you at level 3.

At level 4 you may pick a replacement for Rock Slide. This ability will be upgraded at level 11.

At level 6 you need to choose one of two skills that will be the replacement of Fury Cutter. This Move will be upgraded at level 13.

At level 9 Crustle gets its Unite Move. Rubble Rouser grants a shield and damages nearby opponents. Also, it stuns the hit opponent.

Crustle in Pokémon Unite is a Defender type of Pokémon. It has great crowd control options and survivability. As Held Items we recommend:

As Battle Item we recommend you Eject Button. It gives you additional escape opportunities.

How to Play Crustle in Pokémon Unite

Crustle in Pokémon Unite is a Defender. You are the shield of your team. Engage the teamfight and take all the damage. At level 1 Fury Cutter will be a good choice to help your team to kill neutrals. All of his later choices are great. Rock Tomb and Stealth Rock are good for supporting and protection, while Shell Smash and X-Scissor are attack options. Good luck in your further matches.