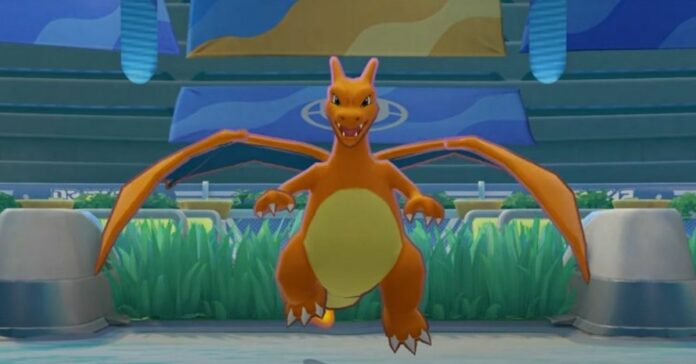 Charizard in Pokémon Unite is an All-Rounder type of Pokémon with a Novice Difficulty to play. It starts the match as Charmander then turns into Charmelion at level 4. At level 9 it evolves into Charizard. In this guide, we will tell you everything you need to know about Charizard in Pokemon Unite.

How to Get Charizard in Pokémon Unite

To get Charizard in Pokémon Unite you will need to buy a Unite License. It costs 6,000 Aeos Coins or 345 Aeos Gems. Also, Charizard is one of the starter characters. You may obtain it after completing the first tutorial.

At level 1 you need to choose one of two abilities, while the other one will be available to you at level 3.

At level 5 you can choose a replacement for Flame Burst. This ability will be upgraded at level 11.

At level 7 you need to pick one of two Moves that will be the replacement of Fire Spin. This Move will be upgraded at level 13.

At level 9 Charizard gets its Unite Move. Seismic Slam is a cool-looking Move. The user grabs the opponent, flies to the air, and then suplexes it, dealing a huge amount of damage.

Charizard in Pokémon Unite is an All-Rounder type of Pokémon. It has great crowd control options and deals a lot of damage. As Held Items we recommend:

As Battle Item we recommend you Eject Button as it is always a good choice that helps you to escape death.

How to Play Charizard in Pokémon Unite

Charizard in Pokémon Unite is an All-Rounder. You should charge straight to opponents and deal damage with your abilities and basic attacks. At level 1 we recommend you pick Flame Burst to poke your enemies. Your later choices should be based on your preferences. All of the available options are good for Charizard and you just need to decide whether you want to deal more damage or be more survivable with shields and dashes. Good luck in your further matches.