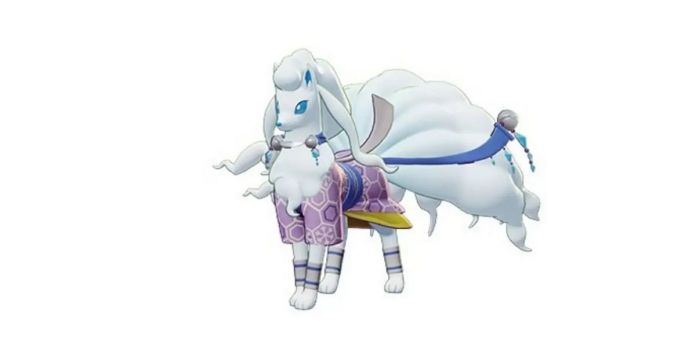 Alolan Ninetales in Pokémon Unite is an Attacker type Pokémon with an Intermediate Difficulty to play. It starts the match as Alolan Vulpex then evolves into Alolan Ninetales at level 4. In this guide, we will tell you everything you need to know about Alolan Ninetales.

Hot to Get Alolan Ninetales in Pokémon Unite

To obtain Alolan Ninetales in Pokémon Unite you will need to buy a Unite License. It cost 8,000 Aeos Coins or 460 Aeos Gems. Once you bought it you will be able to use this character. Also, Alolan Unite License is a day two bonus for the “14 Day Welcome Gifts” event.

At level 4 you will be able to replace Powder Snow with one of two abilities. Both of them will get the upgrade at level 11. These abilities are:

At level 6 you may choose the one of two following Moves. It will be the replacement Icy Wind. These abilities will be upgraded at level 13.

At level 9 Alolan gets its Unite Move. Slow Globe deals damage to the enemies in a large AOE around you. It deals increased damage to frozen opponents.

As you can see Alolan Ninetales in Pokémon Unite is a great damage dealer with lots of crowd control and even some support abilities, but it lacks mobility and survivability. Your life lies mostly on your Defenders and crowd control abilities. At level 1 we recommend you to pick Powder Snow, as it has a faster cooldown than Icy Wind. Avalanche and Dazzling Light both are great Moves. Pick the first option if you lack damage or the second if your team needs more crowd control. Aurora Veil is a great support Move and it overshadows the Blizzard, but don’t forget about the second one if you need additional damage.

Alolan Ninetales in Pokémon Unite is an Attacker type of Pokémon that mostly deals damage with its abilities. As Held Items we recommend:

As Battle Item we highly recommend you the Eject Button as it gives you at least some mobility. X-Attack is also a good option to make your Alolan a killing machine for a short time, but you may feel a lack of mobility.

Alolan Ninetales in Pokémon Unite is a damage dealer that gives some great support to its team. Lots of crowd control and support abilities are always welcomed. Learn how to play this character and you will crush your frozen opponents with a powerful blow of ice wind. Good luck in your further matches.