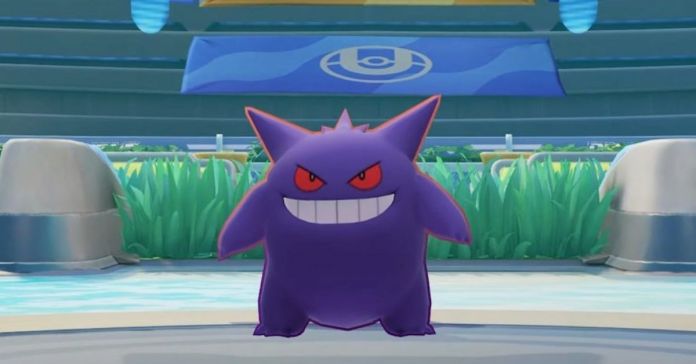 Gengar in Pokémon unite is a Speedster type of Pokémon with Expert Difficulty. It starts the match as Gastly and evolves into Hauter at level 5. Finally, at level 9 your Pokémon transforms into Gengar. In this guide, we will tell you everything you need to know about Gengar.

How to get Gengar in Pokémon Unite

To obtain Gengar in Pokémon Unite you will need to buy a Unite License. It costs 10,000 Aeos Coins or 575 Aeos Gems. Once you bought it you will be able to use this character.

Gengar’s Basic Attack boosts each of your third attacks with additional damage. The other passive ability is Levitate. It increases your Movement Speed when your character is out of combat.

At level 1 you can choose one of two Moves, while the other one will be obtained at level 3. Will-O-Wisp shoots three fireballs deals damage to the opposing Pokémon in front of you and sets them at the fire with additional damage. The second ability is Lick. It attacks your opponents with Gengar’s tongue and pulls them towards you.

RELATED: When Will Pokemon Unite Release on Mobile Phones? Answered

Reaching level 5 allows you to choose between Shadow Ball and Sludge Bomb. Both abilities are replacements of Will-O-Wisp. The first one hurls a blob in opposing Pokémon, deals damage, and decreases the target’s Movement Speed and Sp. Def. At level 11 gets its damage increased. The Sludge Bomb allows you to hurl a ball that deals AOE damage and poisons your opponents. Also, it increases its poison duration when you reach level 11.

At level 7 you may replace Lick with one of the two following options. The first one is Dream Eater. It puts the opposing Pokémon to sleep. When this ability is used again Gengar appears behind the sleeping enemy, deals damage restores itself some HP, and reduces the cooldown of Shadow Ball or Sludge Bomb. At level 13 the damage and amount of HP restored by this move will be increased. The other option is Hex. It allows its user to disappear and move to the designated location. It deals damage in the area where the user re-appears and if the opponent you hit is under some debuff, gets its cooldown reduced. Hex increases its damage with the upgrade at level 13.

Gengar Unite Move you get at level 9 is Phantom Ambush. The user jumps to the designated area and starts to sneak with increased Movement Speed. The ability deals damage to opposing Pokémon and decreases their Movement Speed for a short time if it is used again while you sneaking.

Gengar in Pokémon Unite is a very mobile character. Hex is one of his best abilities to engage or disengage teamfight and it should be picked over Dream Eater. Your choice between Shadow Ball and Sludge Bomb should be based on your personal preferences. If you want to deal harass damage then pick the Shadow Ball as it has a lesser cooldown. If you want to have a great potential to deal burst damage to a group of enemies, pick the Sludge Ball as it combines with Hex.

Gengar is a Speedster with damage based on its abilities. Your item choices should reduce your Moves cooldown and increase their damage. For your Held Items you should pick:

As a Battle Item, the X-Attack will be a good addition to your build, as it improves your damage.

Gengar in Pokémon Unite is a difficult character. It is vulnerable if you choose the wrong position in a teamfight. But if you learn how to play this Pokémon you will be a real nightmare to the enemy team. Professional Gengar appears from nowhere helps his team and disappears immediately. It has a great potential to end a fight before your opponents understood they were attacked.

This is everything you need to know about Gengar in Pokemon Unite. While you are here, take a look at our guide on Slowbro.