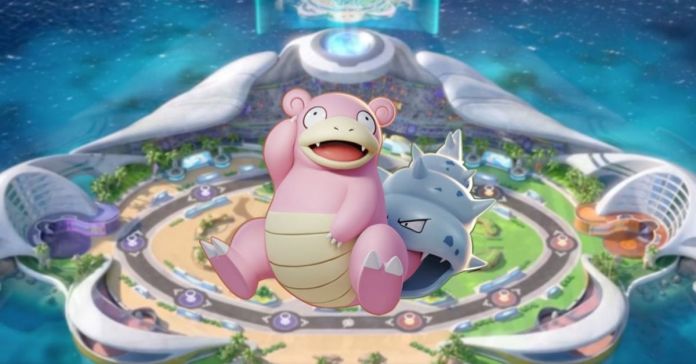 Slowbro in Pokémon Unite is a unique Defender with range attacks. In this guide, we will tell you everything about this Pokemon, including him moves and items, as well as how to get this Pokemon.

How to get Slowbro in Pokemon Unite

Slowbro has two passive abilities. Its Basic Attack boosts each of your third attacks, decreasing the enemy’s Sp. Def. The second ability Oblivious makes Slowbro lose HP gradually and allows you to nullify these losses by dealing damage to an opposing Pokémon with your Moves. Also, it decreases the enemy’s Sp. Def.

At level 1 you can choose between two abilities Water Gun and Slack Off, while the one you didn’t choose will be given at level 3. Water gun builds up power to shoot a fierce stream of water, dealing damage and decreasing the enemy movement speed. The longer Slowbro charges the ability, the more power, range of the move, slowing effect, damage you will get. Slack Off let your Pokémon lie down and recover some HP. Water Gun would be the better option at level 1, as it is better to deal damage at the beginning of the match.

By reaching level 4 you will be able to choose between Scald and Surf. These abilities will replace your Water gun. With Scald, Slowbro starts to shoot scalding water. It deals AOE damage and lowers the movement speed and the attack of the enemy Pokemon. When hit, steam will emit from the enemy Pokemon. Surf is charge ability with the additional effect of making water waves. The first wave deals damage to opposing Pokemon in the area of effect and throws them. The first ability gives you additional damage and crowd control within a good range, while the second one makes you more mobile.

At level 6 you need to choose the replacement of Slack Off ability. The first option is Amnesia which regains some health and after usage, increases Defense and damage dealt by Slowbro’s special moves and gives you a status immune state. The second option is Telekinesis gives you additional crowd control ability. It allows you to lift your opponent and throw it off by using this ability again.

Your Unite move appears at level 9. Slowbeam damages opponents in front of you and locks them up. Slowbro itself becomes unable to move and creates a shield while using this attack.

Slowbro in Pokémon Unite is a good support-tank character that gives a lot of opportunities to your teammates to deal damage and can survive some damage from the enemies.

As a Defender, you should pick something that stacks up well with your abilities and increases your survivability. The recommended options for Held Items are:

As Battle Item Eject button is a good option that gives you more mobility.

Slowbro in Pokémon Unite is not simple, but very fun character to play. It requires some experience and understanding of how its abilities work. But this studying will be worth it as Slowbro is also a useful character and it will be a good addition to your team. Good luck in your further matches.