A brand new trailer has been released today for Persona 5 Scramble The Phantom Strikers, the Persona 5 spin-off game launching this year on Nintendo Switch as well as on PlayStation 4.

The new trailer showcases both the game’s story and gameplay, and it features one epic track from the original games, Rivers in the Desert. The trailer features some spoilers, though, so avoid watching it, especially if you haven’t completed the original Persona 5.

Persona 5 Scramble will feature a brand new action-oriented experience as well as some of the mechanics that make the series unique, such as Persona Fusion. By combining Personas obtained during battle, players will be able to create brand new ones, and earn points that can be used to enhance them. Skill Cards will also be in, allowing players to teach any Persona specific skills, allowing for better customization.

While Persona 5 Scramble has been confirmed from the get-go for Nintendo Switch, the original persona 5 is nowhere to be seen on the console. An enhanced version called Persona 5 Royal is releasing soon on PlayStation 5, and Atlus may consider releasing it on Switch, especially if Persona 5 Scramble does well. Sadly, this is just speculation at this point, since nothing has been said on the matter.

Persona 5 Scramble launches next month in Japan. A Western release date has yet to be announced. 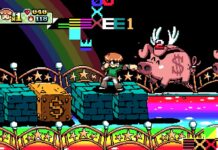