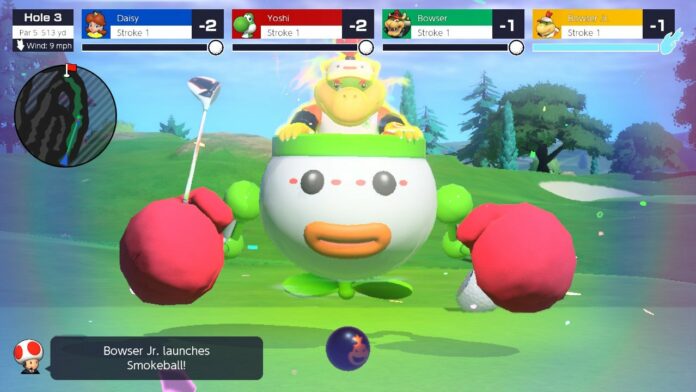 Mario Golf: Super Rush features 17 different characters, not counting the customizable Mii characters, that come with different stats and their own unique special abilities that allow for multiple playstyles. While not all characters are the best for all play modes, they are extremely balanced and mostly viable in both offline and online play.

Here’s everything you need to know to play Bowser Jr. properly in Mario Golf: Super Rush.

Bowser Jr. is a rather balanced character, coming with decent Power, Speed, and Control. The true downside of the character is his mediocre Stamina, which makes it difficult for the character to excel in play modes where you need to use Stamina a lot, like Speed Golf and Battle Golf. Lower Stamina also means fewer uses of the Special Dash. Additionally, Bowser Jr. comes with a decently high Spin stat, compared to other characters, so you need to have mastered curve shots to take advantage of this.

Bowser Jr.’s Special Shot is Smokeball, which causes smoke in the landing area that conceals pretty much everything from the flag to holes and balls. This ability is quite useful in a lot of different situations, but it requires a good level of knowledge of courses and strategies in order to be effective. The most common usage, for example, is to hide balls during Speed and Battle Golf to get in the opponents’ way, or to hide the hole to make it harder for the opponents to put the ball in the hole.