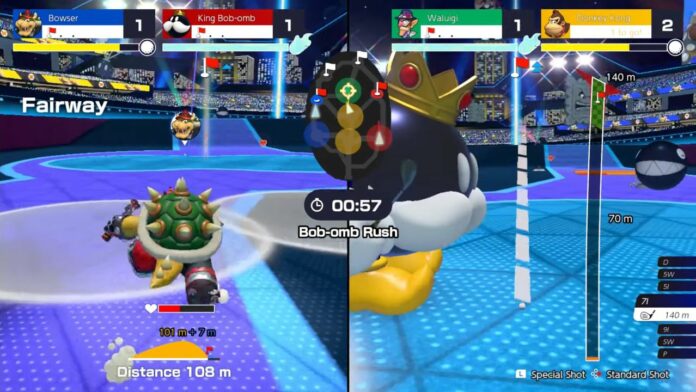 Battle Golf is among the many different play modes available in Mario Golf: Super Rush, and definitely among the most interesting. While Speed Golf already introduces some twists that make the experience faster-paced, Battle Golf brings everything up a notch by introducing two unique courses, tons of exclusive obstacles, and a ruleset that will turn every game into a vicious battle for the top.

Here are some useful tips to win in Battle Golf mode in Mario Golf: Super Rush

How to Play Battle Golf in Mario Golf: Super Rush

Battle Golf, like Speed Golf, is an additional play mode in Mario Golf: Super Rush where up to four players compete in the Battle Golf Stadium courses to capture the nine holes scattered all over them. The first player to capture three holes first wins the match, but do not think it will be easy, as the Battle Golf Stadium courses provide some additional tools to get in the way of other players more often than not, turning this mode into a real battle.

How to Win in Battle Golf in Mario Golf: Super Rush

The two Battle Stadium courses, Strategic and Technical, are rather different from one another, and thus you will need different strategies to win. The first one features a straightforward design where it’s better to go after holes not targeted by other players, since navigating the terrain is rather easy, and more ground can be covered by proper usage of the dash mechanics. Once you have decided which hole to target, however, it’s generally better to keep focused on it, even if other players are closing in, as you may lose precious time switching between holes without conquering them.

The Technical course, on the other hand, features a much more complex design where you will need to use advanced techniques like Topspin and Backspin to avoid all sorts of obstacles. This complicated design all makes it a little harder for multiple players to go after the same hole, so you can focus on getting better shots without having to worry about opponents getting in your way. In case they do in both courses, you should always take advantage of Bomb-ombs and Banana Peels to knock them down and slow them down. They can do the same to you, obviously, so beware.

With time being of the essence, you will also have to use your Special Shots and Special Dashes wisely. Special Shots are quite versatile, as they let you cover way more ground than usual, but they can also be used to knock down opponents, as most of them will unleash a blast that will knock down any opponent in the vicinity. Using Special Dashes is possibly even more important to cover long distances, but in Battle Golf, you may want to go for short bursts, as you need to preserve stamina as much as possible. Collecting Coins and Hearts will restore the Special Shot and Stamina meter faster, so make sure to get as many of them as possible as you move from one hole to another: having special moves ready to go can make a huge difference in this mode.