Home Game Guides How to Recruit Giovanna in Triangle Strategy 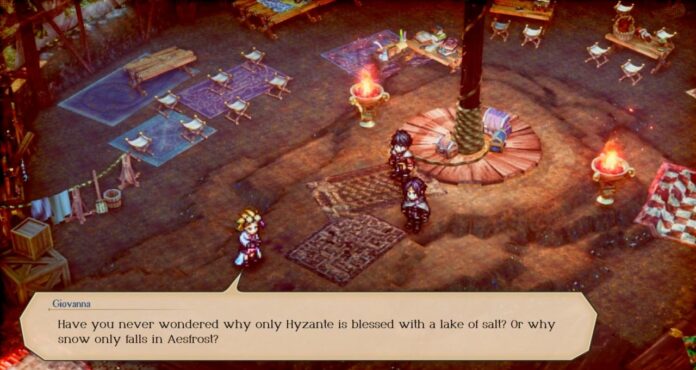 Despite being very traditional in a lot of ways, Triangle Strategy still manages to stand out from the competition thanks to the excellent quality of many of its features, including the extremely varied character roster that features tons of different characters coming with their own unique abilities.

Among the optional characters available in the game, one of the most unique is Giovanna. Here’s how to recruit this eccentric researcher.

How to Recruit Giovanna in Triangle Strategy

Giovanna, like many of the optional characters in Triangle Strategy, is not locked behind any story path, so you will be able to recruit her no matter if you have decided to stand with Aesfrost or Hyzante at any point during the story.

To recruit Giovanna, you will have to unlock her Character Story, which is done by increasing Serenoa’s Convictions to certain values. To get the chance of recruiting Giovanna, you will have to increase Serenoa’s Liberty to 1600, which is a very high value that most players will be able to achieve only on a second playthrough. Once this is done, you will be able to start Giovanna’s Character Story by pressing the + button and interacting with the new icon in the lower right part of the screen.

Giovanna is a very unique character that resembles the Geomancer job in the classic Final Fantasy Tactics, as her abilities change depending on the terrain. Her abilities’ power also increases the more TP she has, so having Julio and other spellcasters in the battle party will let her reach her full potential easily.

How to Recruit Giovanna in Triangle Strategy