Home Game Guides How to Recruit Julio in Triangle Strategy 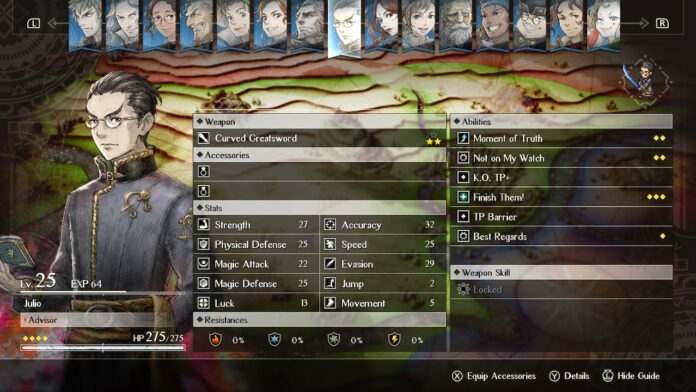 Triangle Strategy features a big character roster, but not all of them will join House Wollfort’s army automatically, as certain conditions are to be met before they can join Serenoa in his quest to change Norzelia forever.

Among these optional characters is Julio. Here’s how to recruit him.

How to Recruit Julio in Triangle Strategy

Julio, like a few other characters in Triangle Strategy, will join Serenoa’s army via Character Stories, special optional event that are unlocked after Serenoa’s Convictions reach certain value.

To unlock Julio’s Character Story, and thus recruit him, Serenoa must have a Morality value of 275 and a Utility value of 110. Once these values are met, you will see an icon in the lower left corner of the screen, and by pressing the + button, you will be able to experience the special event and make Julio join your army.

Julio is a very interesting character archetype, as he comes not only with amazing offensive capabilities, but also some unique abilities that let him restore TPs of his allies and lower those of the enemies. Enemies in later Chapters use plenty of abilities, so lowering TPs with Julio can make quite a difference in the most difficult fights.

How to Recruit Julio in Triangle Strategy