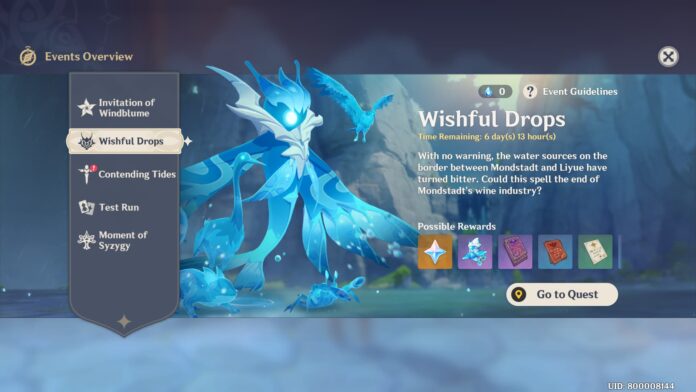 Related | How to get Oceanid Pet Endora in Genshin Impact

Endora’s Education is the core part of Wishful Drops event of Genshin Impact. Once players get to this point they can explore and catch Oceanid creatures to progress through the event.

How to start Wishful Drops Event in Genshin Impact?

To start the Wishful Drops event in Genshin Impact, players have to go to the events tab and click on the go to quest button. This will trigger the quest Life Flows On. During this quest, you will learn that there is some problem with the natural water and Rhodeia is responsible for that.

In your journey through the quest, you will meet Endora, the mini Oceanid who will, later on, join you as a pet, granted you successfully complete the Wisful Drop event.

After completing the aforementioned quest, players are taken to the Endora’s Education event page, where they can start exploring the first area, which is the Sunlit Mountainside.

Endora’s Education and Rhodeia’s Rage are the two main pillars of Genshin Impact’s Wishful Drops event. In Rhodeia’s rage, players will challenge a nuanced version of the Oceanid boss. There are new task and challenges to take on with this new event.

We will cover an in-depth guide on Genshin Impact’s Wishful Drop event in an other article. We will also be showing the different exploration areas and how to complete them. So, make sure to check out our Guides section.