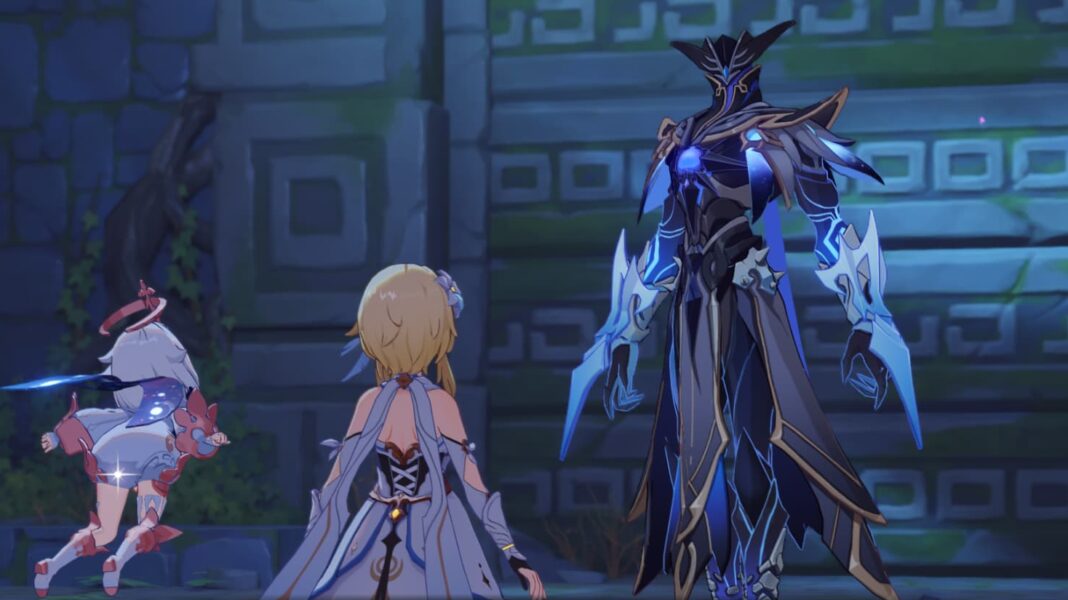 The Voluntary Sacrifice is the very first quest in the new Genshin Impact‘s Archon Quest Chapter I: Act IV – We Will Be Reunited. In this quest, players will learn two of the biggest Treasure Hoarders groups, one from Mondstadt and one from Liyue, allying together to raid a ruin – heavily guarded by the Abyss Order. With this Genshin Impact guide, we will walk you through every part of the We Will Be Reunited – Voluntary Sacrifice quest.

Genshin Impact players need to satisfy some pre-requisites before they can unlock the new archon quest Chapter I: Act IV – We Will Be Reunited. We already have an in-depth guide on what you need to do to unlock and start the quest. So check that one out.

Talk to Lan and Ganyu

Players have to travel to Liyue and talk to Lan and Ganyu near the Adventurer’s Guild, to begin with, Chapter I: Act IV – We Will Be Reunited: Voluntary Sacrifice quest.

Go to the Ruins

Once you are done talking to Lan and Ganyu and accepted the Commission to check what the treasure hoarders are up to. You have to visit the ruins marked on your map.

When you interact with the Ruin you will get the option to select party members with Cryo users as recommended. You don’t have to worry about the party as during the Voluntary Sacrifice quest – you will only have an introductory fight with the Abyss Herald. So, chose any decent team comp and you get through the ruins without any problem.

While exploring the ruins, you will have to cross the bubble corridor similar to the Great Bubble Crash that we got in the Peculiar Wonderland event, during the Windblume Festival. This one is easy to cross.

In the depths of the ruin. You will finally come across the Treasure Hoarder, who is dead, and an upside-down Statue of Seven. Soon a trap will activate. Turn right and try to escape the ruins.

As soon as you find the dead Treasure Hoarder, traps will activate. Next, you have to escape the ruins.

How to get past the bubble traps in Genshin Impact Voluntary Sacrifice quest?

Now, this is the most tedious part of the quest. You have to get through a bubble corridor and the ground you see behind will disappear after few seconds. This means there is no room for error. If you get caught in the bubble you die.

What we recommend is run through the corridor and do not touch any extra platforms. Use the side space to fill your stamina meter or to avoid a three bubble wave. You can use characters like Hu Tao and Xiao to get past the bubbles while Venti and Keqing will help you to get over the bubble.

Encounter and Battle with Abyss Herald

Finally, you will come across Abyss Herald. Fight him and when he is at 50% of the HP, he will find out that you are the Traveler after a cutscene he will escape and you will too.

Finally out of Ruins, Wait, is that Dainsleif?

After escaping the ruins you will find Dainsleif, exhaust his dialogues to complete the Voluntary Sacrifice quest.

After completing the Voluntary Sacrifice quest, players will receive the following rewards.