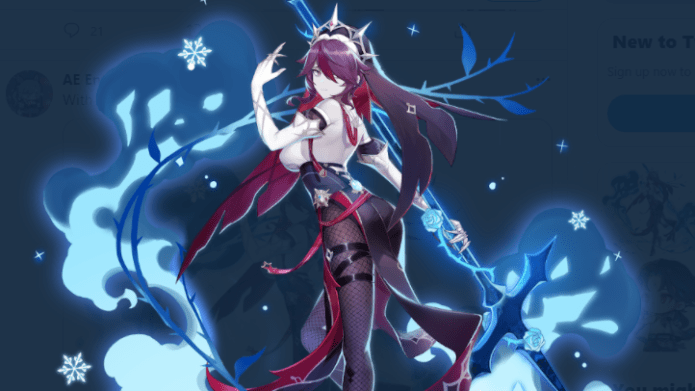 Genshin Impact’s upcoming four-star Cryo user, Rosaria idle animation was leaked earlier today. The leak comes from a prominent leaker who goes by the name of Lumie. In the past, Lumie has leaked many information on Genshin Impact future content and playable characters, and most of the times the leaks are on point.

Rosaria has a total of two idle animations that we can see in the leaked video. In the first idle animation, Rosaria plays with a kunai while one of her hand folded. And, in the second idle animation, it looks like Rosaria is pulling the strings of an air guitar. It may sound weird when put in words. So, it is better you see Rosaria’s idle animations yourselves.

Introduced with Genshin Impact 1.2 update, Rosaria soon became one of the most sought after Genshin Impact playable character – all thanks to her character design(Oops). As we mentioned earlier, Rosaria is a four-star cryo user whose weapon of choice is a polearm. Her elemental skill is called Confession and her elemental burst attack is called Sacrament of Life.

Check out our previous guide – Genshin Impact: Rosaria Elemental Skill, Element Burst, Attack Talent, Constellations and Passive Ability. And, if you don’t have time to spare, here is a brief look at Rosaria’s attack talents and elemental abilities.

Rosaria is a four-star Cryo polearm user whose attack talent is called Education Spear and is comprised of the three different types of normal attacks that we usually see in Genshin Impact.

Charged Attacks – Rosaria consumes a certain amount of stamina to lunge forward, dealing damage to the opponents along the way.

Plunging Attacks – Rosaria plunges from mid-air to strike the ground below, damaging opponents along the path, and dealing AoE DMG upon impact.

Rosaria’s elemental skill in called Confession and using this skill Rosaria quickly moves behind the target enemy, piercing and slashing with the polearm – causing Cryo damage.

Rosaria’s elemental burst attack is called Sacrament of Life. In this attack, Rosaria performs a 360 swing using her weapon, knocking down all the surrounding enemies, and at the same time, ice spears hit the ground causing Cryo elemental damage.